ST. ANDREW DEANERY — The students at St. Andrew-St. Elizabeth Ann Seton School consider the priests that serve their parishes to be pretty special.

They also know that priests need prayers to carry out their ministry. So, the children have been happy to wear two-toned wristbands resembling a Roman collar to demonstrate their support. Inside, the wristbands feature an important reminder to “Pray for Priests.”

The wristbands originated with fourth-grade teacher Mary Jo Voto. When Justine Lakatos, the mother of Amanda, a fifth grader, and Veronica, who is in the third grade, noticed Voto wearing the wristband, she recognized it as a meaningful way to honor and pray for clergy members during the Year for Priests. She initially ordered 600 from The Catholic Shop in Madeira, after being given a special deal by owner Dan Giroux. She later ordered another 30 for family members and friends.

The students wore the wristbands at a special Mass on Jan. 29 to kick-off Catholic Schools Week. Before the start of the Mass, Father Rob Waller, pastor of St. Andrew Parish, gave Archbishop Dennis M. Schurr, who celebrated the liturgy, a wristband of his own to wear.

“The kids thought it was very cool when he showed them he was wearing it,” Lakatos said.

“The archbishop told the children that he prays for priests all the time,” added Father Waller. “It was good as a priest to see the little kids coming up for Communion and seeing the priests’ collar on their wrists.”

Father Waller said he frequently reminds the students to pray for priests. “I encourage them to pray for more priests and for good priests.”

“We pray for priests a lot,” said fourth-grader Stephanie Renner, a member of St. Andrew Parish. “They have an important duty to teach people about God, so they need our prayers.”

“It’s important for us to take time to pray for priests,” added Ander Kohrs, also a fourth grader and member of St. Elizabeth Ann Seton Parish. “I think God wants us to pray for them.”

The children feel lucky to have Father Waller and Father Michael Cordier, pastor of St. Elizabeth Ann Seton, serving their respective parishes and were quick to note what they feel makes them good priests.

Father Waller has encouraged the students to continue to wear the wristbands, especially on Fridays when school Masses are celebrated at St. Andrew for the junior high students and at St. Elizabeth Ann Seton for the younger children. All of youngsters came together for the Mass with Archbishop Schnnur.

“They were terribly thrilled to have the archbishop here,” Father Waller said. “You could tell how much he enjoyed being with them, too. It made the occasion festive.”

In addition to the students, many teachers, parents and parish staff members continue to wear the wristbands, he noted, saying, “People do love their priests.” 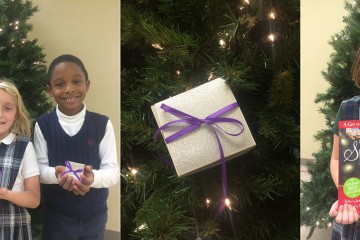