Nearly 60 years ago, Vatican II recognized several titles of the Blessed Virgin Mary. But it focused on one in particular: “Mother.”

On Oct. 11, the Catholic Church marked the 60th anniversary of the opening of the Second Vatican Council, more commonly known as Vatican II. While the council addressed many issues, it aimed to present the Church to the modern world. Bishops worldwide gathered at St. Peter’s Basilica in Rome for the event, which consisted of a series of four deliberative sessions from 1962 until 1965.

One of the principal documents produced by the council features a chapter centered on Mary. Lumen gentium, the Dogmatic Constitution on the Church, was released by Pope Paul VI on Nov. 21, 1964.

During an address that day, the Roman pontiff confirmed Mary’s title as “Mother of the Church” and called the chapter about her Lumen gentium’s “apex.”

“For it is the first time — and to say so fills our hearts with deep emotion — that an Ecumenical Council has presented such an extensive synthesis of Catholic doctrine on the place of Mary Most Holy in the mystery of Christ and of the Church,” he said.

Here are eight things it says about Mary.

‘Truly the Mother of God’

“The Virgin Mary, who at the message of the angel received the Word of God in her heart and in her body and gave Life to the world, is acknowledged and honored as being truly the Mother of God and Mother of the Redeemer,” Lumen gentium reads. “Redeemed by reason of the merits of her Son and united to Him by a close and indissoluble tie, she is endowed with the high office and dignity of being the Mother of the Son of God, by which account she is also the beloved daughter of the Father and the temple of the Holy Spirit.”

Mother of the Church

The document emphasizes that while Mary surpasses all creatures in heaven and on earth, she is, at the same time, “one with all those who are to be saved.”

“The Catholic Church, taught by the Holy Spirit, honors her with filial affection and piety as a most beloved mother,” the document reads.

Participant in the ‘Economy of Salvation’

“With her the exalted Daughter of Sion, and after a long expectation of the promise, the times are fulfilled and the new Economy established, when the Son of God took a human nature from her, that He might in the mysteries of His flesh free man from sin,” Lumen gentium says.

The document contrasted Mary’s obedience to Eve’s disobedience in the Garden of Eden.

“The Father of mercies willed that the incarnation should be preceded by the acceptance of her who was predestined to be the mother of His Son, so that just as a woman contributed to death, so also a woman should contribute to life,” the document stresses.

‘Handmaid of the Lord’

Mary’s “yes” to being the mother of God made her an active participant, the council pointed out.

“Embracing God’s salvific will with a full heart and impeded by no sin, she devoted herself totally as a handmaid of the Lord to the person and work of her Son, under Him and with Him, by the grace of almighty God, serving the mystery of redemption,” the dogmatic constitution reads. “Rightly therefore the holy Fathers see her as used by God not merely in a passive way, but as freely cooperating in the work of human salvation through faith and obedience.”

‘Queen of the universe’

“Finally, the Immaculate Virgin, preserved free from all guilt of original sin, on the completion of her earthly sojourn, was taken up body and soul into heavenly glory, and exalted by the Lord as Queen of the universe, that she might be the more fully conformed to her Son, the Lord of lords and the conqueror of sin and death,” the document declares.

Mary is, as the document calls her, the “model of virtues.”

“Piously meditating on her and contemplating her in the light of the Word made man, the Church with reverence enters more intimately into the great mystery of the Incarnation and becomes more and more like her Spouse,” it reads. “For Mary, who since her entry into salvation history unites in herself and re-echoes the greatest teachings of the faith as she is proclaimed and venerated, calls the faithful to her Son and His sacrifice and to the love of the Father.”

Mary, the document concludes, will “shine forth on earth, until the day of the Lord shall come, as a sign of sure hope and solace to the people of God during its sojourn on earth.”

She constantly intercedes for humanity, it adds.

“The entire body of the faithful pours forth instant supplications to the Mother of God and Mother of men that she, who aided the beginnings of the Church by her prayers, may now, exalted as she is above all the angels and saints, intercede before her Son in the fellowship of all the saints,” the document states, “until all families of people, whether they are honored with the title of Christian or whether they still do not know the Saviour, may be happily gathered together in peace and harmony into one people of God, for the glory of the Most Holy and Undivided Trinity.”

They died praying for others: Two Catholic priests martyred by Nazis beatified in Italy

Why is St. Luke the patron saint of butchers? Here’s a clue

Pope prays for sincere dialogue among religions in video message 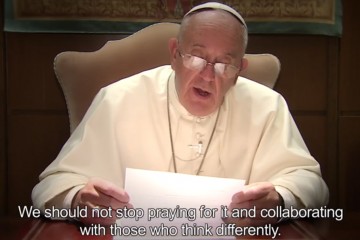