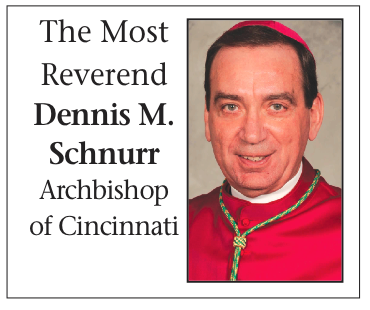 Five hundred people gathered in Springfield, July 27, asking leaders in the House of Representatives to reform our broken immigration system.

People from all over the Archdiocese of Cincinnati, from Columbus and as far away as Lexington and Louisville, Ky. peacefully came together outside House Speaker John Boehner’s office to ask for comprehensive immigration reform. Father Ed Gearhart, pastor of St. Theresa of the Child Jesus Parish in Springfield, read Archbishop Dennis M. Schnurr’s statement of solidarity with those at the rally, encouraging those present:

The archbishop’s message, “We march with hope,” follows:

I am sorry that I personally cannot be with you today as you call upon our U.S. Congress to fix our nation’s broken immigration system. Please know that I stand in solidarity with you, our immigrant brothers and sisters. And I give thanks for what so many others of you do to care for migrants in our communities and to struggle to protect their God-given lives and dignities.

Earlier this month, the Holy Father, Pope Francis traveled to an island in the Mediterranean Sea to embrace a boat of migrants fleeing famine and oppression in Africa for a better life. They, like countless others, had no path to legal migration to Europe, and their most powerful ally was hope.They braved the unforgiving waves that had taken the lives of thousands of migrants before them.In a powerful message, the Holy Father told the world:

“These brothers and sisters of ours were trying to escape difficult situations to find some serenity and peace; they were looking for a better place for themselves and their families, but instead they found death. How often do such people fail to find understanding, fail to find acceptance, fail to find solidarity. And their cry rises up to God!

“In this globalized world, we have fallen into globalized indifference… Let us ask the Lord to remove the part of Herod that lurks in our hearts; let us ask the Lord for the grace to weep over our indifference, to weep over the cruelty of our world, of our own hearts, and of all those who in anonymity make social and economic decisions which open the door to tragic situations like this.” (Homily, July 8, 2013)

So today, in our own country, we are mindful of the thousands of migrants who have died crossing our own borders, seeking life. With no choice to feed themselves and their families in their home countries, men, women and children risk their lives crossing a desert wasteland, because there are no legal paths to migration andall less dangerous paths ofentry have been blocked.

In our parishes, our schools and our social service agencies, we worship, learn and live beside more recent immigrants to our land.Consequently, our hearts also go out to the families torn apart by our out-of-balance immigration system.We are sensitive to the fears of the many undocumented residents hiding in the shadows.Too many of them end up being exploited by unscrupulous employers who take advantage of their status.And many others avoid reporting being victims of crime to the proper authorities, because they don’t want to be separated from their loved ones.

In addition, our current immigration laws challenge everyone’s confidence that our system sensibly regulates the flow of migrants and keeps us safe from threats of terrorism, violence, drug-trafficking, and other criminal activities.We must be a nation of laws, but laws that make sense and don’t cause undue suffering.We applaud those local public officials and police departments who, despite this broken system, forge bridges of trust with immigrant communities.Yet ultimately, we believe only comprehensive immigration reform can bring back a sense of law and order and better safeguard the God-given human dignity of those seeking a better life.

We hope and pray that the U.S. House of Representatives and its leaders will advance the cause of comprehensive immigration reform that allows our nation to protect its borders and provides for family reunification, stronger workers’ rights, and pathways to citizenship. Should they fail, should they vote for the status quo, then no one wins — not migrants or their families, not law enforcement, not our economy or communities, not America.

So today, we march with hope.Let us be inspired by the same kind of hope for a better future that drives migrants across seas and deserts;the same kind of hope that drove every immigrant, including many of our own ancestors, to this rich land since before our nation’s birth.Let us pray that Congress and the Administration will restore law and order and courageously welcome those whom we have called strangers as our nation’s own.

Can’t name the 10 commandments? This is pitiful