The financial condition of the Archdiocese of Cincinnati continues to improve, officials told the Archdiocesan Pastoral Council March 7 at its regular quarterly meeting.

Archdiocesan finances are “stable and balanced,” finance review committee member Ron Kienzle told the group.  “Spending is below revenue and the one area of concern, priest pensions, are coming into line,” he said. Kienzle said that not only was spending down but revenue, from “gains in investments and the generosity of the faithful” are up.

Archdiocesan Accounting Manager Steve Burger said Central Office operations were on budget, “per the direction of Archbishop (Dennis M.) Schnurr” and the health care plan for employees is under control, Burger said.

Finance Director Richard Kelly credited getting “sophisticated direction from Auxiliary Bishop (Joseph) Binzer and the archbishop” with the success of the financial operation and he reminded the council, “we’re a pastorate so we’re thinly capitalized.”

While there is not a large rainy day fund, Kelly said, “Our heat shield doesn’t have any holes in it.”

Archbishop Schnurr credited the work of the finance office and directors.

“I’m grateful to the finance staff. I told them I wanted to have a balanced budget in five years – we had not had that for many years – and they got it balanced in three.”

Kelly said the archdiocese spends a significant amount on “attorneys and health care plan advisors.” He also said that a contribution from the parishes of $400 a month to the priest pension plan was helping get that liability more into line.

Archbishop Schnurr said that although things were stable, “that doesn’t mean we meet all of our needs.” He explained that the current capital campaign would give immediate help to the archdiocese in getting the priest pension fund in a better position as well as serving a growing Mount St. Mary’s Seminary, which now has double the number of seminarians of just five years ago.

In another major section of the meeting at the Bartlett Center at the Athenaeum, the council members broke into groups to answer survey questions based on the Lineamenta of the XIV General Assembly of Bishops, or synod, which will be held this October 4-25 this year. The assembly will take place in Vatican City.

“The Vocation and Mission of the Family In the Church and the Contemporary Church” is a pet project of Pope Francis. He has requested both clerical and lay input into the documents that will guide the discussions of the church’s pastoral approach to marriage and family issues.

The council members broke into groups under the direction of Colleen Gerke, Family and Respect Life Office director, and Father Norm Langenbrunner, who has been assisting the archdiocesan participation in the information gathering.

The breakout groups discussed the 47 survey questions addressing such issues as listening to the challenges of the family on a socio-cultural context; looking at Jesus and the divine pedagogy in the history of salvation; proclaiming the Gospel of the Family today in various contexts; caring for wounded families and the pastoral challenges of those and other family issues.

Those responses will be assembled with lay responses to the online survey that have already been collected and sent to the U.S. Council of Catholic Bishops. In turn, USCCB will assemble responses and comments from all the dioceses in the U.S. and forward them to the Vatican to provide information for the Assembly in October.

In other action, Archbishop Schnurr told the council that there had been a slight language change in the teacher’s contract that changed the phrase “support of” to “advocacy for” beliefs and practices contrary to church teaching.

He also announced that a teachers advisory committee had been created.

The next Pastoral Council meeting will be May 30 at the University of Dayton Riverside Campus.

This story originally appeared in the April 2015 print edition of The Catholic Telegraph.

My Journey: Husband can’t deny wife’s faith, finds his own 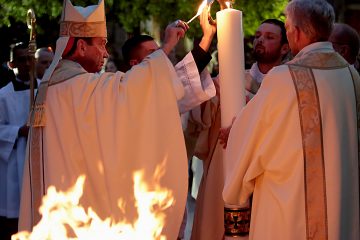