“Since my arrival in this country, I wrote you, satisfied that every exertion would be made to establish a church in this part of the country, as it has been and is my greatest expectation in coming here…There are of our profession [of faith] in this place that I am acquainted with, about 30 souls, two families of my acquaintance that will be here this ensuing spring; adding the probable migration from the neighbourland of Conawago…a considerable congregation may be made here.”

On Jan. 5, 1805, Jacob Dittoe wrote these words to Bishop John Carroll of Baltimore. Having migrated from Germany to Somerset, OH, Dittoe pleaded with the bishop on multiple occasions to send a priest for the care of Catholic souls in Ohio. In the years prior to Dittoe’s arrival, the territory received only a handful of visits from traveling priests. Although Bishop Carroll was unable to send someone to Ohio, he finally commissioned Father Edward Fenwick, O.P., to head to Kentucky in 1808 to establish a Dominican priory and mission in the region.

Born Aug. 19, 1768, in St. Mary’s County, MD, Edward Fenwick went to Europe as a young man to further his education. There, he entered the Order of Preachers (Dominicans). Father Fenwick returned to his home country in 1804 and traveled to Kentucky at Bishop Carroll’s request. Once there, he established St. Rose Priory near Springfield, KY. His first visit to Somerset was in 1808 and he would visit Ohio only intermittently at first, but he returned more often later.

In 1808, the Church established the Diocese of Bardstown (now Archdiocese of Louisville), and Bishop Joseph Flaget and Father Stephen Badin ministered to Catholics in Ohio. St. Joseph Church in Somerset claims the honor of being the first church in the state of Ohio, dedicated on Dec. 6, 1818, by Father Fenwick.

Just as Jacob Dittoe had made efforts to establish a Catholic Church in Somerset, similar efforts were being made in Cincinnati, which was one of the fastest growing cities in America. Michael Scott arrived in Cincinnati in 1805 and offered his home for Catholics to gather for prayer and community. With the support of Bishop Flaget, Christ Church (sometimes called St. Patrick Church) was dedicated on Easter Sunday, Apr. 19, 1819. Located at what is now Liberty and Vine, two years later it became the first cathedral of the new Diocese of Cincinnati

The Diocese of Cincinnati included part of Bardstown territory when the Church established it on June 19, 1821. Initially, it included the entire states of Ohio, Michigan and parts of Wisconsin. Father Fenwick became its first bishop. He knew Ohio well, and people knew him for his ardent zeal as a missionary priest, but the task of bishop daunted him, and he thought his own limitations made him a less-than- ideal candidate.

Bishop Fenwick had a handful of priests, no women religious, and no income to build churches or educate seminarians, as most local Catholics lived in poverty. A “begging tour” in Europe in 1823 and 1824 yielded a few priests, some sacred items and vessels, donations and one woman religious, Sister St. Paul, who taught at Cincinnati’s first Catholic school.

The Archdiocese of Cincinnati had a humble beginning, but the faithful worked hard and relied on God to provide. Bishop Fenwick soon realized his goals of forming a seminary and creating a newspaper, which gave the diocese a foundation for ordaining new priests and spreading the gospel. 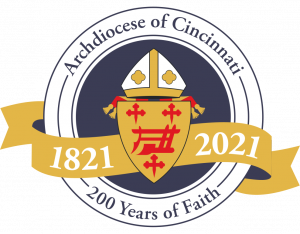