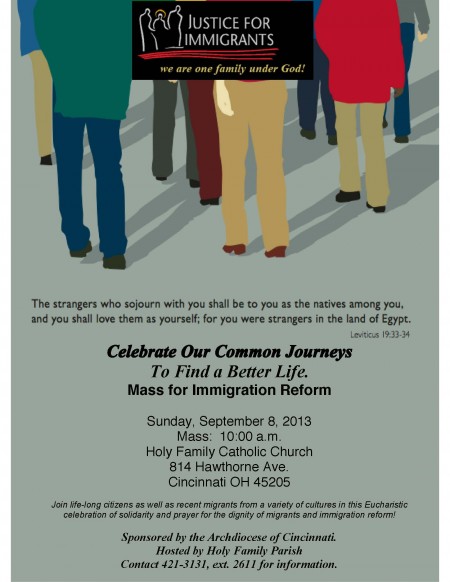 The Archdiocese of Cincinnati will be sponsoring a Mass for Immigration Reform this Sunday, Sept. 8, at Holy Family Catholic Church at 10 a.m.

The main celebrant will be Father Len Wenke, pastoral administrator of Holy Family, with concelebrants Father Louis Gasparini, director of Hispanic Ministries for the Archdiocese, and Father Jim Schutte, pastor of St. Leo Church in North Fairmount. Mass will be followed by light refreshments, sharing of stories, and music.

The Archdiocese of Cincinnati, in conjunction with the United States Conference of Catholic Bishops, has been a supporter of comprehensive immigration reform. The bishops have asked for reform that:

The flyer promoting the Mass reads, “Join life-long citizens as well as recent migrants from a variety of cultures in this Eucharistic celebration of solidarity and prayer for the dignity of migrants and immigration reform!”

In a statement read July 27 at the March for Citizenship in Springfield, Ohio, Archbishop Dennis M. Schnurr called on the House of Representative to follow the Senate’s lead in passing immigration reform.

“We hope and pray that the U.S. House of Representatives and its leaders will advance the cause of comprehensive immigration reform that allows our nation to protect its borders and provides for family reunification, stronger workers’ rights, and pathways to citizenship,” Archbishop Schnurr wrote. “Should they fail, should they vote for the status quo, then no one wins — not migrants or their families, not law enforcement, not our economy or communities, not America.”

Archbishop Schnurr urges participation in day of prayer for peace

Sunday Scripture: The things of God must come first

Nancy Pelosi leaves Mass in Rome due to security concerns 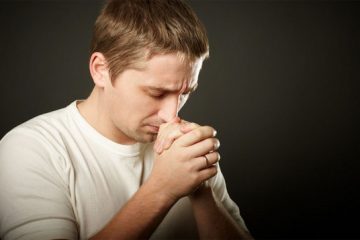