How Catholics can be inspired by art during Holy Week

Denver, Colo., Apr 9, 2020 / 02:01 pm (CNA).- As churches and museums remain closed, Catholic artists have encouraged people to be inspired this Holy Week by finding beauty online or even attempting to create projects themselves.

Andrew Julo is the director and curator for the Verostko Center for the Arts at Saint Vincent College in Latrobe, Pennsylvania. He told CNA that Catholics should look for both familiar and new pieces of art that flow with the narrative of Holy Week.

He said, for example, Catholics should dwell on art that relates to Christ washing the disciples’ feet, the Passion of Good Friday, or the Resurrection on Easter. He said people may also find art depicting pandemics to express solidarity with those who have died of COVID-19.

“Find images that correspond with the days of Holy Week, assemble your own digital exhibition and share it online. While the majority of these digital reproductions can never substitute the experience of seeing the original work in person, they still possess an ability to move our minds and hearts,” he said.

According to the New York Times, the coronavirus has infected over 1.4 million people and killed over 83,000. In response, many international leaders have placed their countries on lockdown, halting church services, artistic entertainment, and numerous businesses.

He pointed to the recent actions from museums around the world who have begun to offer virtual tours online to engage people in art. He suggested viewers take their time in viewing the art and expand the images to the maximum space on the screen to minimize the distractions from ads and other pictures.

“There’s lots of museums throughout the world that are looking to connect with their audiences by sharing their exhibitions, posing questions on social media, and asking folks at home to spend more time looking closely at works of art in their collections,” he said.

Virtual tours of Catholic art, such as pieces by Raphael, Botticelli, da Vinci, Crivelli, and Caravaggio, are being offered for free online through several museums. Among others, a virtual tour may be accessed to view paintings within the Metropolitan Museum in New York, Uffizi Gallery in Florence, Musée d’Orsay in Paris, and National Gallery in London.

For Holy Week, Julo suggested that Catholics view Ford Brown’s Jesus Washing Peter’s Feet; Matthias Grünewald’s Isenheim Altarpiece, which depicts a mangled Christ; and Exsultet scrolls. He said the website of the British Library includes a beautiful example used at the Benedictine Abbey of Montecassino during the 11th century.

“Grünewald imaged Christ with the same lesions that afflicted patients who were dying from the disfiguring disease of ergotism. Here, Christ’s body reminds us of the importance and fragility of our physical being. With so many individuals throughout the world suffering from COVID-19, an image of the crucifixion this year prompts us to remember these infirmities with greater attention,” he said.

David Clayton, an artist and a writer who runs The Way of Beauty, has emphasized the importance of using images in collaboration with prayer. He told CNA that visio divina, “divine seeing,” is a powerful tool alongside liturgical readings, scripture, and the daily office.

“I think the experience that’s going to bear fruit is one of prayer and a pattern of prayer that has the liturgical piety at its heart,” he said. “Then have satellites around that of Catholic devotions, many of which engage with visual imagery.”

He stressed three periods of art that promote authentic beauty – iconography, Gothic, and the Baroque.

He pointed to pieces by Gregory Kroug, a Russian monk and early 20th-century iconographer of the Eastern Orthodox Church; the Madonna and Child by the Gothic painter Duccio; and The Virgin in Prayer by Sassoferrato. He also drew attention to Princeton University, which has recently cataloged images online of icons from Saint Catherine’s Monastery at Mount Sinai.

Gwyneth Thompson-Briggs, a sacred artist who creates custom religious art for homes and churches, discussed with CNA the importance of sacred art as a means to more fully engage in truth. She said art is particularly impactful because humans are both physical and spiritual beings.

“We’re made of body and spirit, and, so because of that, the things that we come in contact within a physical world really do affect our soul,” she said.

“It’s through the visible that we are able to approach the invisible. So the experience of tactile beauty is a hint of the supernatural beauty that we’ll be encountering in heaven. I think Thomas Aquinas says that beauty is the attractive power of truth.”

She suggested that images be viewed slowly and alongside prayer, noting that it is important to allow the art time to open up to the viewer. She said, during the last Palm Sunday, she brought out books of Western art to help engage her children and herself.

“I was grabbing art history books in our living room and looking at great images of Western art from the Baroque and Renaissance and following through the entire Passion. Then looking at images of the agony in the garden or Christ before Pilate or the crowning of thorns,” she said.

“Don’t be in a rush. It takes a while for beauty to unfold itself,” she said. “Making space to really focus on a single painting or a single work of music, [it] really draw[s] all of your attentive powers to experiencing it. I think that can lead to a much more profound understanding and engagement with it.”

She also suggested that Catholics participate in creativity themselves, whether through painting, woodworking, gardening, or knitting.

She said domestic practices may also become transformed into something more valuable for the holiday. She suggested using foods depicted in the Passion, like lamb and unleavened bread, or symbolic dishes, like Good Friday’s hot cross buns, which are topped with a cross and cooked with spices used to signify Christ’s burial.

“These days of quarantine … you find yourself with a bit more time on your hands, but also maybe feeling a bit more anxious and needing to find some constructive way to occupy yourself and find outlets for hope,” she said.

“I think that personal experiences of creativity or making something beautiful is a really great blessing.”

Julo also emphasized the value of creativity. He said that the domestic Church is where Christianity began and he stressed the value of fostering an opportunity to honor the Sacred Triduum. He said people should mark Easter with a special action, whether that is through music, poetry, or even a simple walk.

“It’s helpful to remember that church began in people’s homes. So we in some ways are participating in something that is also very ancient in the domestic space,” he said.

“I would encourage people to try to be creative about how they honor the Sacred Triduum. Gather flowers, branches, or greenery for inside. Light candles. Set up a corner in your home with sacred images including members of your family you’re not able to share physical space with right now. Before meals, make your dining area festive with a table cloth and your nicest place settings …Whether alone or with others, ritualize your meals.”

China’s first saint was martyred on a cross in Wuhan

Shine On: God wants you to be creative

How Catholics can be inspired by art during Holy Week

Hunt for June: Rejoice and be glad 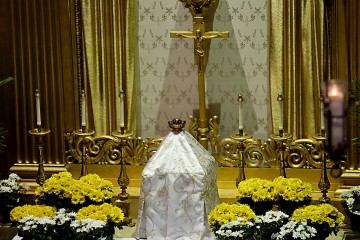