VATICAN CITY (CNS) — The Christmas tree and Nativity scene are symbols of God’s love and hope, reminding us to contemplate the beauty of creation and welcome the marginalized, Pope Francis said.

Baby Jesus, whose parents could find no decent shelter and had to flee persecution, is a reminder of the “painful experience” of so many migrants today, he said Dec. 9, just before the Vatican Christmas tree was to be lit and its Nativity scene was to be unveiled.

Nativity scenes all over the world “are an invitation to make room in our life and society for God — hidden in the gaze of so many people” who are living in need, poverty or suffering, he told people involved in donating the tree and creche for St. Peter’s Square.

The 55-foot-wide Nativity scene was donated by the government and Archdiocese of Malta. It features 17 figures dressed in traditional Maltese attire as well as replica of a Maltese boat to represent the seafaring traditions of the island.

The boat also represents “the sad and tragic reality of migrants on boats headed toward Italy,” the pope said in his speech in the Vatican’s Paul VI hall.

“In the painful experience of these brothers and sisters, we revisit that (experience) of baby Jesus, who at the time of his birth did not find accommodation and was born in a grotto in Bethlehem and then was brought to Egypt to escape Herod’s threat.”

“Those who visit this creche will be invited to rediscover its symbolic value, which is a message of fraternity, sharing, welcoming and solidarity,” the pope said.

The beauty of the pristine forests of northern Italy where the tree grew “is an invitation to contemplate the creator and to respect nature,” he said, adding that “we are all called to approach creation with contemplative awe.”

The Nativity scene and tree will remain in St. Peter’s Square until the feast of the Lord’s Baptism Jan. 9.

Archbishop Lauro Tisi of Trent, speaking at the tree-lighting ceremony as the sun set, told people in St. Peter’s Square that the towering tree had lived decades — decades that saw thousands of people from the region emigrate in search of work in the early 1900s. It’s unconscionable, he said, that people today refuse to welcome those coming from poorer places with the same needs and dreams.

Manwel Grech, a sculptor of religious statues from Gozo, Malta, won a contest to make the Nativity scene. It was dream to create art for the Vatican and have it exhibited in the square where thousands of people from around the world will see it.

With more than a dozen statues of people and a menagerie of animals and other elements in the scene, Grech is a bit of a traditionalist: Mary, Joseph and the baby Jesus are his favorites among the resin sculptures.

He wanted Mary to have a peaceful face because “when you see Jesus, you relax,” he said, and he tried to give Joseph a look of pride.

Grech included several very Maltese touches in the Nativity scene: A traditional balcony decorated with a Maltese cross; a statue of St. George Preca, the country’s only canonized saint; and a “luzzu,” the traditional Maltese fishing boat, which also reminds people of the journeys of migrants across the Mediterranean Sea.

Between the Nativity scene and the Christmas tree, the Vatican placed the cross and chunks of the facade of the Basilica of St. Benedict in Norcia, Italy. The basilica was destroyed by an earthquake in October and dozens of other churches in central Italy crumbled or were heavily damaged. Money left at the Nativity scene by visitors will be donated to the church rebuilding effort in Norcia.

Contributing to this story was Cindy Wooden at the Vatican.

A pilgrimage with Our Lady, Undoer of Knots

Today’s Video: As we head into the darkest part of the year, we celebrate St. Lucy 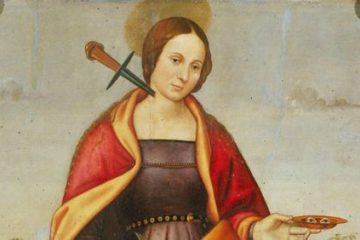