WASHINGTON (CNS) — Even though he wasn’t on the program, Vice President Joe Biden stole the show at a Georgetown University program promoting peace in wake of terrorist attacks in Paris and San Bernardino, California.

Laila Brothers, a Georgetown freshman, had just given a moving reflection about being Muslim and her hijab-wearing mother feeling as if she had “a target on her back” in the month following the terror attacks.

Brothers talked about how Republican presidential aspirant Donald Trump had suggested that Muslims wear a badge to identify them to others. She added how she wanted to spare her mother the stress that comes with wearing the hijab. Her mother’s response: “If they’re talking about Muslims wearing a badge, I already have a badge. My hijab is my badge.”

While Brothers got applause after her remarks, Biden walked up onto the stage and greeted some of the other participants at the Dec. 16 forum, billed as “Interfaith Gathering for Solidarity, Understanding and Peace,” but gave Brothers a warm embrace.

Stepping to the microphone, he said, “My name’s Joe Biden, and I align myself with the words of this courageous young woman.”

Then, using only index cards as reference points, he spoke for nearly as long as the other speakers combined. Among those speakers was Cardinal Donald W. Wuerl of Washington, who was quoted by Biden at one point during his remarks.

The immigrants who came “in waves” to the United States, Biden said, told themselves, “We don’t know the language. We’re not sure if they want us, but let’s go.” 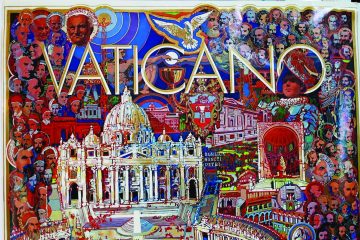