NEW YORK — Bishop Patrick V. Ahern, 92, who served as an auxiliary bishop in the New York Archdiocese for nearly a quarter century, died March 19 at the Mary Manning Walsh Home in Manhattan.

His funeral Mass was celebrated March 24 at St. Patrick’s Cathedral in New York, followed by interment at the Cemetery of the Gate of Heaven in Valhalla. An evening memorial Mass took March 29 at St. Thomas More Church in New York.

Bishop Ahern, who retired in 1994, spent much of his time since then promoting devotion to St. Therese of Lisieux, known as the Little Flower. The late Cardinal John J. O’Connor of New York credited him with playing a primary role in building support for the declaration of St. Therese as a doctor of the church by Pope John Paul II in 1997.

He also helped organize a national tour of the relics of St. Therese and wrote a book about the French saint’s spiritual relationship with seminarian Maurice Belliere. The book, Maurice & Therese: The Story of a Love, took first place for best popular presentation of the Catholic faith in the Catholic Press Association’s 1999 book awards and also won a Christopher Award.
Bishop Ahern once said that St. Therese, who died of tuberculosis at the age of 24, “seemed to me to hold the answers to all of my questions.”

Born March 8, 1919, in New York, Patrick Vincent Ahern attended Manhattan College and Cathedral College in New York; St. Joseph’s Seminary in Yonkers; St. Louis University in St. Louis; and the University of Notre Dame in Indiana before his Jan. 27, 1945, ordination as a priest of the New York Archdiocese.

He served as secretary to Cardinal Francis J. Spellman of New York from 1958 until the cardinal’s death in 1967.

In 1986 he founded the Seton Foundation for Learning, the first Catholic special education program on Staten Island. Bishop Patrick Ahern High School opened in 2000 at Moore Catholic High School as an extension of that program. 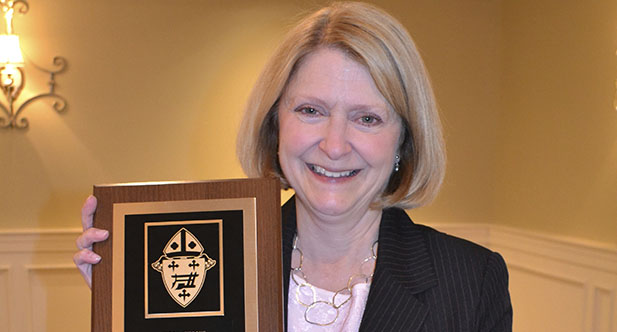