WASHINGTON (CNS) — The head of the U.S. bishops’ Committee on Migration said some migrants from Honduras and El Salvador cannot safely return to their home countries in the near future and should have a special immigration permit extended.

The U.S. government will consider in early November whether to extend, for some migrants hailing from the two countries, what’s known as Temporary Protected Status, or TPS. The designation is for those who come to the U.S. from certain countries because of a natural disaster, continuing armed conflict or other extraordinary conditions. The status for Honduras and El Salvador is set to expire in early 2018.

“There is ample evidence to suggest that current TPS recipients from Honduras and El Salvador cannot return safely to their home country at this time,” said Bishop Joe S. Vasquez of Austin, Texas, chairman of the U.S. Conference of Catholic Bishops’ Committee on Migration. He cited a report issued by bishops’ Office of Migration and Refugee Services titled “Temporary Protected Status: A Vital Piece of the Central American Protection and Prosperity Puzzle.”

The report recommends that the U.S. government extend TPS for some 257,000 people from El Salvador and Honduras in the U.S., who currently have a work permit and reprieve from deportation.

In a letter of introduction to the report, Bishop Vasquez said: “As you read this report, I urge you to keep the people of El Salvador and Honduras, including TPS recipients, in your thoughts and prayers. I encourage you to engage the administration in requesting a TPS extension for El Salvador and Honduras . . . and to reach out to your elected congressional leaders to request they support a legislative solution for TPS recipients who have been in the United States for many years.”

Advocates worry because the Department of Homeland Security, under the Trump administration, has signaled reluctance to extend the status for other countries.

In mid-September, the Trump administration announced the end of TPS for nationals from the North African nation of Sudan, prompting outcry from Catholic groups who say they worry about the conditions the migrants will face upon their return. Though the administration said it is safe for them to return, the U.S. Department of State warned against travel to the country because of “risks of terrorism, armed conflict and violent crime.”

Haitians who obtained TPS after the country’s devastating 2010 earthquake, also are waiting to learn whether they’ll have to return to an unstable country, since DHS also has signaled it plans to end TPS status for the Caribbean nation. Catholic groups and others have said it is not safe for them to return because of instability on the island.

In a similar way, the report says Honduras is a “fragile state” and unable to accommodate the return of a large number of its nationals. El Salvador, too, has a pervasive crime problem, as well as other social ills, and, too, would face hardship with a return of large numbers of nationals, it says.

The report is based on the findings of a delegation from the USCCB and MRS that visited Honduras and El Salvador Aug. 13-19 to examine conditions in those countries and whether they can “adequately receive and integrate the possible return of existing TPS recipients.”

Editors: The full text of the report can be found at: http://www.usccb.org/about/migration-policy/fact-finding-mission-reports/upload/el-salvador-honduras-report-20171016.pdf.

Mission is at the Heart of our Faith 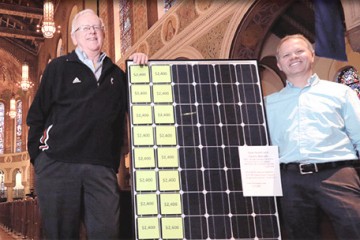