January 22, 2022
Home»Being Pro Life»Brick by brick, this Lego master and disability advocate is building up the Church
Being Pro Life

Brick by brick, this Lego master and disability advocate is building up the Church

John Kraemer isn’t an architect by training, but he is a builder. In fact, he’s probably designed and built more buildings than the average architect.

The only difference? Kraemer’s creations are made entirely out of Lego bricks — and all of them are deep expressions of his Catholic faith.

The centerpiece of Kaemer’s The Lego Church Project is — you guessed it — a giant Catholic church made out of Legos, newly designed each year by Kraemer, generally about two-and-a-half months in the making, and comprising some 30,000 pieces each.

Every year, Kraemer builds the church, displays it at a handful of parishes in the Saginaw, Michigan area around the Advent and Christmas season, and then tears it down and starts again. He’s been doing this for nearly two decades so far, with no plans to slow down.

“What is important for me is to know that I’m doing God’s work … I hope that when people see my work, whether they see it in person or they see the photographs, that they see my love of the faith shine through,” Kraemer told CNA.

“And I have a deep sense of gratitude for those who’ve supported me over the years. It really does mean a lot to me.”

Kraemer has a mild form of cerebral palsy, which affects his learning, his balance, his hearing, and his fine motor control — a fact which makes his ability to construct such intricate Lego edifices all the more impressive.

Another factor? Kraemer doesn’t drive, so he’s had to rely on the kindness of others to ferry him and his models all over Michigan. He also has had to battle a series of illnesses over the years, the uncharted territory of the COVID-19 pandemic, and other hurdles such as his mom’s cancer diagnosis last year.

“Despite the challenges, by the grace of God, I’m still standing, and I’m able to do the things I need to do,” he said.

A foundation of faith

As a kid, Kraemer enjoyed playing with Legos, but he always found that “my friends were building spaceships, and I was not good at that.”

Looking for inspiration on what to build, the obvious solution soon presented itself.

“At that time period for me, church was the core of who we were … so there was a strong emphasis on that, and as I grew up it kind of developed from there,” Kraemer said.

What started as a hobby blossomed into something much more. The first official “display” Kraemer did of one if his Lego churches was at St. Helen’s parish, now called Christ the Good Shepherd, in Saginaw. He has since toured numerous parishes and assisted living facilities with his creations, always garnering a warm reception.

When not in use, Kraemer stores the tens of thousands of Lego bricks in his one-bedroom apartment. During the annual construction stage, Kraemer said he spends anywhere from 2 to 5 hours each day laying bricks.

“As I am building, I’m laying out all of my own personal fears, all my own personal anxieties, any challenges that I’m personally facing … I’m praying with my hands as I am building because I’m trying to build the faith in a very creative way,” he explained. The dimensions of his Lego churches, which can weigh as much as 80 pounds, are somewhat limited by the necessity that they must be transported by car, but they’re still a lot bigger than anything you’ll find at a toy store. Each one is constructed on a plywood base, and his latest effort measured nearly four feet long and two feet high.

Building up the Church

Each church is of Kraemer’s own design, but he says he tried to make his models as realistic as possible, and many are inspired by real church buildings he has visited.

Plus, Kraemer’s churches aren’t merely an expression of his creativity; each one not only “tells a story,” but also sends a message about the things he values. For example, each of Kraemer’s churches bursts with a congregation of smiling plastic people, sometimes as many as 200 strong.

“My [churches] are filled to the brim with people — on purpose, not by accident. …When people see my work, I hope that it inspires them on a deep level to understand the value of the Mass,” he noted.

“It is not a reflection, to me, of the past, but a prayer for the future. … Our Mass attendance numbers have been going down for a long time. And I believe that the laity have an opportunity to be encouragements to others … to make the Mass more of a priority than what it is now.”

In addition, he takes care to include depictions of parishoners with special needs, using items such as wheelchairs and guide dogs.

“I believe that our society is very diverse, and I think that we can do more to represent that. And that’s part of a goal that I have within my own work,” Kraemer said.

Some of Kraemer’s own disabilities are readily apparent, and some are not. He said people he meets in everyday life sometimes make assumptions about him based on first impressions or prejudices.

“We in society are prone to rushes to judgment. We see someone, we see them physically, we interact with them, and we’re making snap decisions on where their values are, where their faith is at. I’ve certainly had to happen to me more than a few times,” he said.

“It kind of shows the fact that we don’t fully know people, but more importantly, we do not take the time to know people. We do not know where they’re at. We do not know what they can handle, what they can’t…someone like me who has cerebral palsy, I have certain challenges, but I know what I can handle, and I know what I can’t. And just to accept the fact that some people are not on the same playing field.”

Kraemer said he enjoys the “display” period each year because it allows him to answer questions about his Lego creations, and to enjoy people’s reactions upon seeing his work, especially the reactions of kids.

But he said it also allows him to explain his deeper motivations for such a labor-intensive project.

“That is a message that I have been broadcasting for 22 years because I live it. I have cerebral palsy — I’m the last person on this earth that I would ever expect to be sitting here talking about the faith in the most creative way possible. And it is a humbling experience to know that I’m doing something amazing that people are enjoying.” 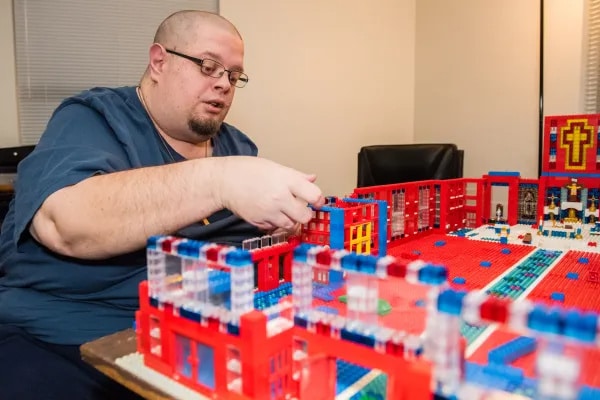 Brick by brick, this Lego master and disability advocate is building up the Church