Hannah Houser feels called to live out the Franciscan charism: to live the Gospel of our Lord Jesus Christ. While she is still in discernment on her path to be with the Sisters of St. Francis, Oldenburg, she’s not letting any obstacles hinder her progress.

Hannah lives with apraxia, a motor speech disorder that makes it difficult to speak and, because of this, she learned sign language at a young age. While not deaf, she attended St. Rita School for the Deaf from Kindergarten through second grade.

“St. Rita School changed my life by teaching me how to communicate with our world,” Houser said.

She credits her teacher, Ellen Brigger, as one of the people who inspired her to consider religious life. “Ellen started a program [at St. Rita’s] called “Apraxia” to help children with speech impairment to learn how to communicate with our world in ASL (American Sign Language) and how to speak,” Houser said. “I would volunteer [at the program] as a teacher’s aid in junior high and high school. Ellen taught and encouraged me to share God’s grace, the spirit of kindness, compassion, love and beauty with others through serving the Lord. She introduced me to the passion of caring and advocating for disabled people.”

Prior to high school, Houser became more involved in her church, St. Aloysius in Shandon. She began signing at Mass, and after confirmation, became a Eucharistic Minister.

After graduating from Hamilton High School in 2013, Houser attended Muskingum University, where she studied sociology with a focus on animal and environmental issues. Following graduation from Muskingum in 2017, Houser continued serving, now at St. Julie Billiart parish in Hamilton. There, she is a member of the choir and signs at Mass.

“Sharing God’s word through signing is a talent that allows me to bring God’s grace to children, and I was teaching signing to children until March 2020,” Houser said. “I’ve also become a volunteer assistant with a youth group where I help teenagers learn about the Bible and how God works in our world.”

Houser had also begun thoroughly exploring religious life and became an Associate with the Sisters of St. Francis, Oldenburg, a title that she shares with her mother and grandmother. In 2019, a song helped solidify to Houser of her mission to become a sister.

“One day, while listening to and signing the song ‘Color of Wind,’ it occurred to me that God was leading me to a vocation with the Sisters of St. Francis, Oldenburg,” Houser reflected. “The realization came with a great burst of joy.”

Houser continued, “On Dece. 6, 2019, St. Nicholas’ feast day, I remember the Lord giving my vocation director (Sister Kathleen Branham) and me the grace to understand how to make my desire to be a sister possible. Through great prayer, wisdom and trust, the Lord led us to the Labouré Society.”

The organization, in existence since 2003, helps aspirants raise funds to decrease their student debt so they can pursue religious life. “Their vision is to bring Catholic priests, sisters and brothers to exist in adequate numbers to fill the world’s needs, where young people everywhere who feel they are called to the priesthood or religious life have the opportunity to pursue that calling,” Houser explained. “One hundred percent of donations are applied to the aspirants’ student loans and are tax-deductible to the donor and aspirant.”

Houser has been active with the Labouré Society since May 2020. The organization helps aspirants in six-month sessions – Houser is currently in her second six-month journey.

“[Being with the Labouré Society] helps me grow the vow of obedience and gratitude for the gifts of the Lord,” Houser said. “The discernment process with the Sisters and Labouré Society has helped me get a sense of community.”

Houser added, “I am excited to share God’s gracious gift of me signing with the sisters. I am looking forward to teaching religion and prayers through basic ASL to children and adults. The ministry of serving those with disabilities and the deaf community is needed in our world today, and I want to serve in these ministries. I want to advocate for disabilities using my signing skills. God’s blessing of signing is a joyfulness to share with our world.”

This article appeared in the March 2021 edition of The Catholic Telegraph Magazine. For  your complimentary subscription, click here. 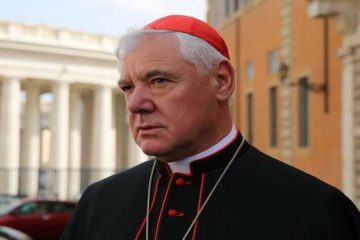