CNA Staff, Sep 17, 2020 / 12:02 am MT (CNA).- As the number of Catholics in the Diocese of Charlotte continues to rise, Bishop Peter Jugis opened a new seminary this week to help prepare future priests in the area.

The bishop blessed St. Joseph College Seminary in Mount Holly with holy water on Sept. 16, officially completing the first phase of the building project, which broke ground in 2018.

“This is an enduring structure that is both traditional and modern, with beauty and function, that we hope will inspire future generations of Catholics in Western North Carolina to continue our mission to share the Gospel,” said Father Matthew Kauth, St. Joseph’s rector, according to the Gaston Gazette.

The $20 million project, built in the Gothic architectural style, includes 40 seminarian rooms, a conference room, a refectory and kitchen, classrooms, administrative offices, guest rooms, a temporary chapel, and a meditative cloister walk. Donors have so far contributed $15.5 million to the seminary.

The 27 seminarians at St. Joseph Seminary will also attend classes at nearby Belmont Abbey College.

“St. Joseph is an extraordinary milestone for our diocese and for the Charlotte region,” Jugis said,” according to the Charlotte Observer.

“It’s a sacred place where those who feel called to serve God can be nurtured and grounded in faith that will carry throughout their lives.”

The new seminary is a response to rapid growth of the Church in Charlotte. There are an estimated 400,000 Catholics in the diocese, more than 10 times the number present when the diocese was established in 1972.

When the diocese’s seminary program first opened four years ago at St. Ann Catholic Church, seminarians lived at a former covenant and other housing nearby. Since 2016, enrollment has tripled, the Charlotte Observer reported.

“Though we’ve been blessed with many good and holy priests, we need more to meet the needs of our rapidly growing flock,” Jugis said in a statement. “So it is essential that we make every effort to help form young men to be ready to serve in our parishes when the time comes.”

John Paul I, ‘the smiling pope,’ to be beatified after miracle approved by Pope Francis 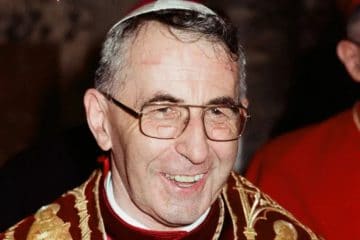