Vatican City, Mar 25, 2020 / 03:10 pm (CNA).- The miraculous crucifix at which Pope Francis prayed Sunday for an end to the coronavirus has been taken down from its altar and transported to St. Peter’s Square, so it can be present on Friday during the pontiff’s benediction “Urbi et Orbi.”

The crucifix was removed from the Church of San Marcello al Corso by Vatican personnel Wednesday evening, and is expected to be installed temporarily at St. Peter’s Square on Thursday, according to Vatican journalist Francesco Antonio Grana.

The crucifix was venerated as miraculous by Romans after it was the only religious image to survive unscathed from a fire that completely gutted the church on May 23, 1519.

Less than three years later, Rome was devastated by the “black plague.”

Upon the request of Rome’s Catholics, the crucifix was taken in procession from the convent of the Servants of Mary in Via del Corso to St. Peter’s Square, stopping in each quarter of Rome.

The procession continued 16 days, from August 4th to the 20th, 1522. When the crucifix was returned to St. Marcellus, the plague had disappeared from Rome.

The crucifix has since processed to St. Peter’s Square every Roman Holy Year – around every 50 years- and the crucifix has engraved on its back the names of each pope to have witnessed those processions. The last name engraved is that of Pope St. John Paul II, who embraced the crucifix during the “Day of Forgiveness,” during the Jubilee Year 2000. 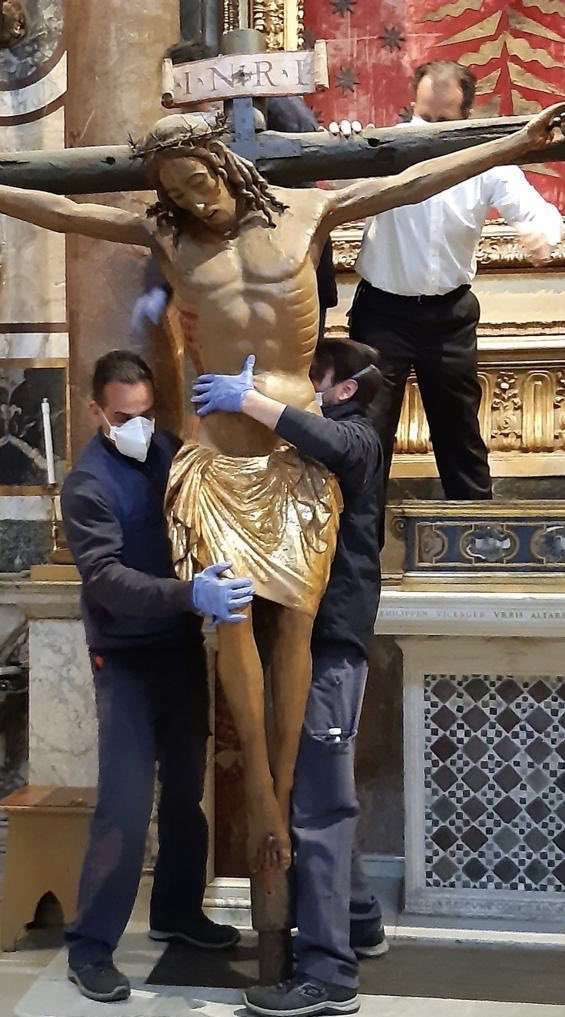