What is the secret which enables the Catholic Church to hold together such staunch Catholic men to the number of more than one and a half million in the Holy Name Society alone? They believe that Christ is divine, and that He is really and truly present in the Holy Communion which they receive monthly.

Archbishop John T. McNicholas, O.P., wrote these words in 1925 to promote membership in the Holy Name Society (HNS). The HNS was initiated in 1274 by Pope Gregory X to encourage the reverence and love for the Name of Jesus. He gave

the task of promoting this devotion to the Order of Preachers (Dominicans). In 1909,
when he was a teacher at Immaculate Conception College in Washington, D.C., McNicholas, a Dominican priest, was made the director of the Holy Name Society for the U.S. During his tenure, he helped organize 3,000 parish groups, diocesan unions and founded the society’s magazine, The Holy Name Journal. It was this same passion and dedication to the devotion that McNicholas brought to the Archdiocese of Cincinnati when he was consecrated archbishop in 1925.

The HNS predated McNicholas’ arrival by several decades. Between 1902 and 1933, nearly 180 societies were formed at archdiocesan parishes. At the parish level, the HNS was a fraternal organization, led by the pastor, for Catholic men to grow in their spiritual life and public devotion to Jesus.

The Society’s first local public parade and rally were in 1907 in Mt. Adams, when HNS members from four parishes gathered to march from Holy Cross School to the church and ended with benediction. In 1911, 23,000 men participated in the rally in downtown Cincinnati.

On the second Sunday in October, members gathered at their parishes to receive Holy Communion as a group before gathering at the beginning of the parade. Together, they marched to the final destination, where there would be a speech, final benediction and a renewal of the Holy Name Pledge.

The parades often had themes, reflecting important movements of the time. Speeches in the 1950s warned against the evils of communism, while parades in the 1960s spoke out against racism.

However, in 1957, attendance at the parade was already in decline. Following World War II, numbers for the parade and membership in the HNS never again reached the high numbers they had in the first half of the century.

In 1965, Msgr. Martin Gilligan gave a lecture in Dayton on the “Constitution of the Church.” He made comments about the HNS, saying it was an organization not compatible with the modern parish and called it a dying organization. Msgr. Gilligan made national news and received a rebuttal from the national HNS.

The final parade in Cincinnati was in 1969. The national HNS changed its focus to personal prayer, retreats and promoting fraternal life in the parish.

In 2015, a group of Catholic men in Cincinnati resurrected this annual practice, naming their organization the Men’s Holy Name Eucharistic Society Procession. In 2020, more than 500 men marched from the Cathedral Basilica of St. Peter in Chains to Old St. Mary’s Church, ending with benediction and prayers. As this event gains more participants each year, it is a reminder of our devotional heritage and a renewal of honor of the Holy Name of Jesus.

Pope Francis in Erbil: ‘Today I can see at first hand that the Church in Iraq is alive’ 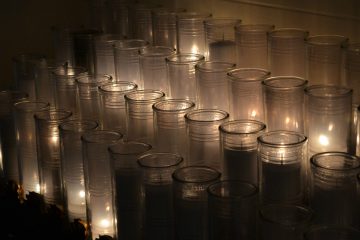