Two Celebrations in one at St. Mary of the Assumption 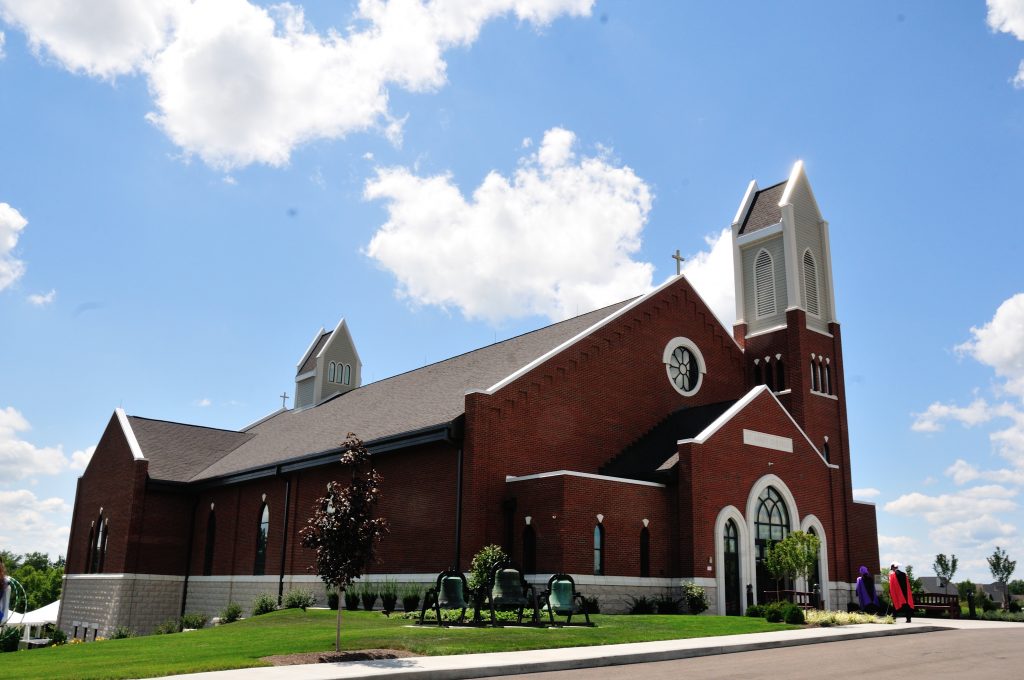 The past and the future have converged at St. Mary of the Assumption, now celebrating 150 years of serving the faithful in Warren County.

A year ago the parish moved into a new church in Springboro, after outgrowing its building in Franklin. On August 13, Archbishop Dennis M. Schnurr celebrated Masses for both anniversaries.

“How wonderful it is to be celebrating our 150th anniversary with a brand new church,” said the pastor, Father Jim Manning. “An influx of parishioners from Springboro meant we needed to be accessible to both communities. The building in Franklin was 100 years old, and it was not accommodating the influx. ”

Doyle Key, the parish administrator, said a primary goal for the $7.2 million new church was to retain the feel and look of the Franklin church, built in 1912.

“The bells you see displayed in front of the new church were the bells of the 1912 church,” he said. “They did not finish off the bell tower, and those bells were sitting outside the church in the same setup they are in now.”

Although the bells were eventually installed in the old church’s tower, the new church has a digital bell system. “We had the bells pulled out of the tower and placed outside as they were originally,” Key said. “We tried to carry tradition from one church to the next. All the windows in the new church are from the old church.”

Along with the windows, made in Germany, came the Stations of the Cross and statues. “Most important,” said Key, “is we brought about 98 percent of the people.”

Lifelong parishioner and unofficial church historian Harriett Foley, 82, said the church’s founders were Irish immigrants. Beginning in 1854, a priest from nearby Holy Trinity would travel to Franklin to celebrate Mas, first in homes and then in a meeting room above the fire department.

“Finally, in 1867, they created a parish under Archbishop Purcell,” she said. “Founder Nicholas Gough’s son-in-law, Bryan Carey, solicited money from everyone in town. We found a little book in the church safe where he had written that he was soliciting donations from the ‘richer people’ to help the poor Irish, whose pecuniary resources were very little, but who needed a nice place to worship.”

The first church rose in the Commons — a no-man’s land north of Franklin — and cost about $1,000. “It had no tower, no sacristy and no pews,” Foley said. The first resident priest, Father James Crowley, arrived in 1883. German immigrants soon followed the Irish to farm or work at the paper mills and industries. Further growth came with new subdivisions after World War II.

Building a new church coincided with the parish being incorporated into a new pastoral region. Father Manning took charge of both when the previous pastor, Father Chuck Mentrup, died in an automobile accident. “I agreed not to use the ‘R’ word, retirement, until we paid off the debt,”
he said.

The move has meant explosive growth for the parish. “When the church was in Franklin, it was around 900 families,” Father Manning said. “We are at 1,477 today. We have nearly doubled, and in just one month. It’s all location, location, location. We moved where people were living and when they saw this being built, brick by brick, they took a great deal of ownership.”

Key credited Father Manning with organizing an effective transition. “Father Jim did a tremendous job,” he said. “We were having trouble with the closure. At the final Mass in Franklin, Father Jim talked about the grief that goes along with change. At that very Mass, I would think he turned half of the people who were against it right then. They’re still with us today.”

“This last year in my life, in my priesthood, has exceeded all of my expectations in the spiritual dimension,” Father Manning said. “It’s just wonderful to see the hand of God move in our parish. It is the Holy Spirit at its very best.”

Coming tomorrow: About the contemporary painting of the Assumption of Mary pictured in the photo below.

Two Celebrations in one at St. Mary of the Assumption