ARCHDIOCESE — Mark Curnutte, a Cincinnati Enquirer writer who has pored over thousands of statistics in his career, has to pause after sharing this:  Globally, 25,000 people a day die of hunger.

Curnutte is reading from his book A Promise in Haiti: A Reporter’s Notes on Families and Daily Lives (Vanderbilt Press; $25). He lived among three families in Gonaïves, Haiti, in 2006 and 2008 and saw how precious food is.

In the Western Hemisphere’s poorest nation, even one meal a day is not guaranteed. When Curnutte returned in 2008 amid a global food crisis, he immediately noticed family members were much thinner. A child’s food for the day might be just a little flour, or salt washed down with water.

But as food dwindled, families’ faith did not. Eighty percent of Haitians are Roman Catholic. These people who have almost nothing feel that “if they don’t believe, they may not have anything,” Curnutte explains.  “From a faith perspective, they’re rich.”

The experience has shaped Curnutte’s own faith.

He first visited Haiti in 1996 with the Hands Together mission. In 1999, he became a fundraiser for the organization and makes appeals at Masses throughout the Midwest.

“You see the majesty of the church in Third World countries that you might not see in this country,” he says. “It’s our church — its beauty, eloquence, power and action. We can be proud.”

Curnutte tries to “educate gently” during his appeals. He points out that the root meaning of the word “Catholic” is “universal,” and that “the people in Haiti are our brothers and sisters.”

Curnutte struggled with witnessing the families’ poverty and wanting to help while also maintaining journalistic detachment. The average Haitian lives on less than $2 a day. “Blan (white man), how much will you give me for my baby?” a woman asked Curnutte as he walked through a Gonaïves slum.

Ultimately, Curnutte decided to give money to the families he profiled and reveal his decision to his readers. He recalled the words of a Miami University journalism professor: “You’re a human being first.”

A goal in writing the book was to pay homage to Let Us Now Praise Famous Men, in which James Agee and Walker Evans humanized three Southern farm families during the Depression.  “I wanted to see if I could find and relay the vast commonalities of life,” Curnutte writes in his author notes. The book includes 55 color photos he shot.

Those familiar with Curnutte from his coverage of the Cincinnati Bengals for the Enquirer might have expected a football book. But unhappiness was building in Curnutte’s life around 2005. His marriage ended. He was approaching his mid-40s. He was dissatisfied with the NFL beat — “rich men fighting with even richer men over gluttonous amounts of money,” as he puts it.

After his divorce, Curnutte was asked by a relative what he wanted to do. “Go back to Haiti,” he answered.

“I could look out on the horizon and see the point I wanted to go toward,” he says. “I had no choice but to keep moving forward, to do better.”

Curnutte, a father of three, says he came away from the divorce “realizing nothing in this world is permanent. I think I could understand the Haitians a little bit better since I was learning to live without my home or family.”

His brokenness, he says, opened up space inside him for the Haitian families. He adds: “I have to believe there’s a bigger reason up there” for the path his life has taken.

In 2009, Curnutte left Bengals coverage to be the Enquirer’s social issues reporter, writing about the poor, immigrants and other minorities. “Faith is to be put into action,” he says.

In February 2010, Curnutte returned to Haiti to write about its earthquake for the paper. Gonaïves, 60 miles north of Port-au-Prince, was spared. However, conditions made it impossible for Curnutte to travel there.

But his spiritual trip continues. “I’m atoning for sin. I’m on a journey,” says Curnutte, 49. For a year and a half, he has been growing out his hair. “My hair looks like how I feel inside. It’s a sign of being on the outside looking in,” he says. “I have an easier time seeing Jesus in the poor and minorities rather than in people who look like me.”

Curnutte admits he doesn’t have the world’s solutions. “One answer I do have is trying to use my position as a writer to be a voice or conduit for others who are otherwise forgotten,” he says.

The chief thing the three Haitian families wanted to express to a larger audience, says Curnutte, is that they are “not victims. They are people who have worked hard and take care of what they do have.”

Similar to his experience at Mass in Haiti, Curnutte doesn’t fully understand the language but appreciates the “intense spirituality” of the service. “I get more out of it, and I put more into it,” he says.

Around him are immigrants he’s written about. “I am humbled to be a part,” Curnutte says. “I believe in what the parish is trying to do for the people, and it challenges me more.”

Curnutte will be signing his book at 7 p.m., Aug. 10 at Joseph-Beth Booksellers in Norwood’s Rookwood Pavilion as a fundraiser for Hands Together and its Haiti missions. A Promise in Haiti is also available at www.amazon.com, www.borders.com and other online sources.

Efforts to care for God’s creation continue in archdiocese 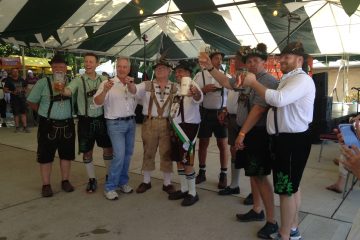