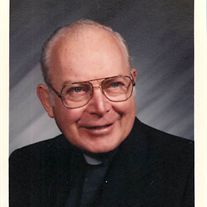 Rev. Richard L. Klug died on Thursday, June 15, 2017. He was born on September 11, 1926 in Cheviot, Ohio. He attended St. Gregory Seminary and received a Licentiate in Sacred Theology from the Pontifical Gregorian University in Rome. He was ordained on December 8, 1951 at Our Lady of Humility Chapel, North American College in Rome, Italy by Bishop Martin J. O’Connor.