Deacon Jerome “Jerry” Bishop believes men are still being called by God to the priesthood, just that they’re more reluctant to respond. In the case of his impending ordination, it’s a case of better late than never.

Despite first feeling the call to the priesthood in the third grade, Bishop went on to serve as a police sergeant, member of a SWAT team and as a county court employee before entering Mount St. Mary’s Seminary. He will be ordained in May — at the age of 63.

A study commissioned by the United States Conference of Catholic Bishops in 2009 found that that average age or priests ordained that year was 36. Deacon Bishop knows that ordinations of men over 60 are more exception than rule, but he doesn’t think his age is an issue.

“I never subscribed to the fact that you get to a certain age and you just stop doing things or just play the rest of your life away,” Deacon Bishop said. “I think God gave us our lives to live, and to do his will. I don’t think that ends at age 65 or 70. As long as you’re able to do it, you keep doing it.

“I come with a different set of job skills,” he said. “Twenty-six years of dealing with people in difficult situations, and managing people and managing budgets.”

The youngest of eight children, Deacon Bishop spent a portion of his life caring for his parents in addition to advancing in his civil service career. He was always involved in parish life and when he finally made his decision to retire from his secular career to begin his path to ordination, his friends and family weren’t surprised.

“Most of them wondered why I hadn’t done it earlier,” Deacon Bishop said.

Still, despite feeling the call at a young age and remaining open to it later in life, Deacon Bishop wanted to do God’s will as it pertained to his possible ordination.

Going back to school was a challenge for Deacon Bishop, who doesn’t see himself as an academic. He has bachelor’s degree in communications from Wright State University, earned in 1985.

Deacon Bishop attended St. Raphael and later St. Teresa parochial schools in Springfield. He also attended Catholic Central as a high school freshman and graduated from Springfield North High School. He has been a parishioner at St. Teresa Parish in Springfield for more than 50 years.

A Springfield native, Deacon Bishop said that one of challenges awaiting him after ordination, and one facing all priests, is shepherding a flock that seems to be facing a crisis of moral values.

“It seems like people have lost a sense of sin at its very basis,” Deacon Bishop said. “Everything that was bad is good now and everything that was good is bad. It’s going to take a lot of work for parish priests to re-catechize people. A lot of it has to do with overcoming poor catechesis. It seems at times like a monumental job but I think we’re up to it.”

Deacon Bishop advises anyone who thinks they might have a calling to the priesthood to begin discerning right away, but he adds that it is never too late to do God’s will.

“…If you’ve entertained the notion that God might be calling you to priesthood and wondering about it, there’s only one way to find out, that’s to discern through the seminary,” he said. “If God is calling you, he isn’t going to stop. If you’re having these thoughts, there’s a reason you’re having them. Don’t put it off.”

Deacon Bishop and fellow seminarian Deacon James Romanello will be ordained Saturday, May 18 by Archbishop Dennis M. Schnurr at the Cathedral of St. Peter in Chains. 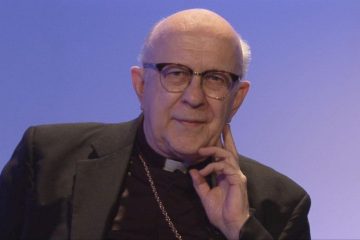