WASHINGTON (CNS) — Mizraim Guerrero, a senior in the School of Foreign Service at Georgetown University, said he found his voice as an immigrant advocate after experiencing firsthand the uncertainty and turmoil many immigrants deal with on a regular basis.

Guerrero came to the United States from Mexico when he was 4, crossing the desert and the Rio Grande with his mother and brother to join their father who had been already been working in the United States. He learned "headfirst what it means to be undocumented" when he was 14, he said. His father, who was stopped for a traffic violation, was put in a detention center and went through lengthy deportation proceedings until he finally obtained a work permit.

Near that time, Guerrero’s grandmother died in Mexico and his family could not return home for her funeral because they were afraid they would not be allowed to return to the United States.

The uncertainty with his father and inability to pay respects to his grandmother strengthened the teenager’s resolve then and continues to motivate him now. Today, as a Deferred Action for Childhood Arrivals, or DACA, recipient, he is working with the immigrant community in college and hoping to become an immigration attorney.

He was quick to point out that not all immigrant stories are the same and that young immigrants in particular don’t all "fit the DACA narrative of straight A students," but fall under a much broader context.

Despite the challenges that immigrants, himself included, face today in the United States, he is convinced "we will continue to find resiliency," he said during a Sept. 24 panel discussion at Trinity Washington University. He was joined by three other students without legal documentation, who also spoke about putting on a brave face or helping others in a climate of increasing anti-immigrant rhetoric.

The panel, "Undocumented and Unafraid: Student Activism in the Era of Deportation," was sponsored by Faith in Public Life, an advocacy group of faith leaders based in Washington, and moderated by John Gehring, the group’s Catholic program director.

Two students on the panel attend Trinity Washington University and the school’s president, Patricia McGuire, said in introductory remarks the DACA students on campus "urge the rest of us to walk with them and be their allies and advocates."

She urged the audience, predominantly Trinity students but also other guests, to help "restore the once large heart of the United States in welcoming those who sought help and hope in this nation."

The student panel, which also included a student from The Catholic University of America, expressed a combination of frustration and dogged perseverance. Despite the panel’s title and the advocacy work many of them are involved in, the fear and uncertainty these students live with almost daily clearly weighed on them.

Arlin Tellez, a sophomore at Trinity majoring in international relations and political science, who came to the United States from Mexico with her mother when she was 13, said she became an active organizer right after graduating from high school in North Carolina. There she could not receive help with in-state college tuition as an immigrant.

She said she went straight from "waitressing to civil disobedience" and saw right away that young people were not the only ones speaking up. The immigrant community had a larger support network than she had realized.

"If I come across as angry, it’s because I am," she said, recounting the devastation she experienced of leaving her father and grandmother behind in Mexico and not being able to see them again, Coupled with that is not knowing if she will be deported or what will happen to the DACA program. In November, the U.S. Supreme Court will review President Donald Trump’s decision to terminate the Obama-era program.

There are a few tangible things Tellez does hold onto. One is the prayer card her grandmother gave her before she left Mexico. She clutched it tightly in her hand during the journey to the United States and now keeps it in her dorm room as a reminder not only of her family, but of her Catholic faith. She also said she has great mentors who "love me and guide me in different ways."

Daniela Zelaya, a Trinity senior who is double-majoring in early childhood education and sociology, came to the United States with her parents when she was 3. She said recent raids by the U.S. Immigration and Customs Enforcement made her nervous and fearful for the first time. If her parents were to be deported, she would be left to care for her siblings including a brother with Down syndrome.

Her voice cracked a little when she said if she self-deports, something she has thought about but doesn’t want to do, she has no connection to the country she left as a toddler.

"I feel privileged to be here," she said, adding that she doesn’t give up because she is continually motivated by her parents and her Christian faith.

Jose Gutierrez, a senior history major at Catholic University who came to the United States from El Salvador when he was 9, said the thought he could be deported tomorrow is unsettling. He acknowledged the uncertainty takes a toll, making him think why keep going and pursue a degree, for example, if one day he will have to leave.

He said he has been depressed about this, but he also is determined not to let fear and frustration beat him.

Gutierrez said he is agnostic, but he does have "faith in people."

Editor's Note: The Heart and Beauty of Our Growing Faith 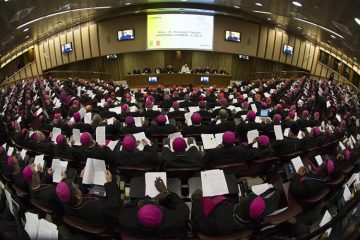