Members of Congress want a vote to protect abortion survivors – will they get one?

Vatican City, Apr 10, 2019 /(CNA).- In an essay published Thursday at CNA, Pope Emeritus Benedict XVI offered his thoughts about the sex abuse crisis facing the Church. Benedict reviewed the sexual revolution of the 1960s, and examined its effects on priestly formation and life, before suggesting the Church’s proper response.

“Today, the accusation against God is, above all, about characterizing His Church as entirely bad, and thus dissuading us from it. The idea of a better Church, created by ourselves, is in fact a proposal of the devil, with which he wants to lead us away from the living God, through a deceitful logic by which we are too easily duped,” Benedict wrote in “The Church and the Scandal of sexual abuse,” published April 11.

“No, even today the Church is not just made up of bad fish and weeds. The Church of God also exists today, and today it is the very instrument through which God saves us.”

The emeritus pope’s essay was published simultaneously in German at Klerusblatt, in Italian at Corriere della Sera, and in English at Catholic News Agency and the National Catholic Register.

The former pope said the sex abuse crisis cannot be understood apart from its wider social context, noting that “in the 1960s an egregious event occurred … the previously normative standards regarding sexuality collapsed entirely, and a new normalcy arose.”

“This was in many ways a very difficult time … the extensive collapse of the next generation of priests in those years and the very high number of laicizations were a consequence of all these developments.”

Concurrently but independently, “Catholic moral theology suffered a collapse that rendered the Church defenseless against these changes in society,” he wrote.

The crisis of moral theology led to an abandonment of the idea of intrinsic evil, and a rejection of the role of the Magisterium by some theologians, to which the 1993 encyclical Veritatis splendor was, in part, a response.

Benedict wrote: “There are values which must never be abandoned for a greater value and even surpass the preservation of physical life,” calling martyrdom “a basic category of Christian existence.”

“There is a minimum set of morals which is indissolubly linked to the foundational principle of faith and which must be defended if faith is not to be reduced to a theory but rather to be recognized in its claim to concrete life,” the emeritus pope reflected.

He also discussed the ecclesial reaction to pedophilia, noting that the 1983 Code of Canon Law “did not seem sufficient for taking the necessary measures,” and that over time “a renewal and deepening of the deliberately loosely constructed criminal law of the new Code began to take shape.”

Benedict reflected on Christ’s saying that “ Whoever causes one of these little ones who believe in me to sin, it would be better for him if a great millstone were hung round his neck and he were thrown into the sea.”

“The phrase ‘the little ones’ in the language of Jesus means the common believers who can be confounded in their faith by the intellectual arrogance of those who think they are clever. So here Jesus protects the deposit of the faith with an emphatic threat of punishment to those who do it harm,” he explained.

“The modern use of the sentence is not in itself wrong, but it must not obscure the original meaning,” in which it is clear “that it is not only the right of the accused that is important and requires a guarantee. Great goods such as the Faith are equally important.”

“A balanced canon law that corresponds to the whole of Jesus’ message must therefore not only provide a guarantee for the accused, the respect for whom is a legal good. It must also protect the Faith … A properly formed canon law must therefore contain a double guarantee – legal protection of the accused, legal protection of the good at stake. If today one puts forward this inherently clear conception, one generally falls on deaf ears when it comes to the question of the protection of the Faith as a legal good. In the general awareness of the law, the Faith no longer appears to have the rank of a good requiring protection. This is an alarming situation which must be considered and taken seriously by the pastors of the Church.”

Benedict finally turned to what ought to be done: “Only obedience and love for our Lord Jesus Christ can point the way.”

“The Lord has initiated a narrative of love with us and wants to subsume all creation in it. The counterforce against evil, which threatens us and the whole world, can ultimately only consist in our entering into this love. It is the real counterforce against evil. The power of evil arises from our refusal to love God. He who entrusts himself to the love of God is redeemed. Our being not redeemed is a consequence of our inability to love God. Learning to love God is therefore the path of human redemption.”

“A paramount task, which must result from the moral upheavals of our time, is that we ourselves once again begin to live by God and unto Him. Above all, we ourselves must learn again to recognize God as the foundation of our life instead of leaving Him aside,” Benedict stated.

The emeritus pope also said there must be a profound appreciation of the astoundingness of the Incarnation, and, through it, Christ’s presence in the Eucharist.

“The Second Vatican Council was rightly focused on returning this sacrament of the Presence of the Body and Blood of Christ … to the center of Christian life and the very existence of the Church. In part, this really has come about, and we should be most grateful to the Lord for it.”

But “a rather different attitude is prevalent,” he said. “What predominates is not a new reverence for the presence of Christ’s death and resurrection, but a way of dealing with Him that destroys the greatness of the Mystery,” citing declining participation in Sunday Mass and treatment of the Eucharist as “a mere ceremonial gesture.”

“We do not need another Church of our own design. Rather, what is required first and foremost is the renewal of the Faith in the Reality of Jesus Christ given to us in the Blessed Sacrament.”

While “there is sin in the Church and evil … even today there is the Holy Church, which is indestructible. Today there are many people who humbly believe, suffer and love, in whom the real God, the loving God, shows Himself to us.”

“In the trial against the devil, Jesus Christ is the first and actual witness for God, the first martyr, who has since been followed by countless others.”

Witnesses can be found today “who stand up for God with their life and suffering. It is an inertia of the heart that leads us to not wish to recognize them. One of the great and essential tasks of our evangelization is, as far as we can, to establish habitats of Faith and, above all, to find and recognize them,” Benedict concluded. 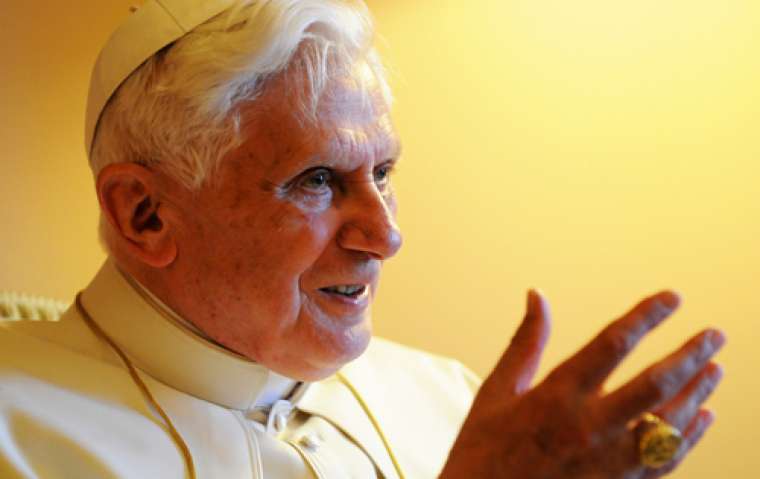