My Dear Friends in Christ,

When I was about 11-years-old, the television show MASH had its series finale, entitled, “Goodbye, Farewell and Amen.” Jessica Rinaudo, the editor of The Catholic Telegraph, graciously allowed me to write one last column – without a word limit. Those of you who know me personally could testify that I am never short on words; however, this time, I will be brief.

In 2011, I began to write the “Question of Faith” column for The Catholic Telegraph, which I enjoyed. Father David Endres, who succeeded me as seminary dean, admirably took over the column when I was transferred to the Apostolic Nunciature in 2016. I enjoyed writing the column because, not only was it a form of faith formation, it also allowed me to reach people throughout the entire archdiocese. As a seminary professor, it was hard for me to be disconnected from the life of parishioners and the northern parts of the Archdiocese of Cincinnati.

And then, during my time at the Apostolic Nunciature, not only could I not teach, but I also could not write or publish under my own name, as I did not want to be a distraction to the mission of the Apostolic Nuncio or cause controversy. I missed teaching, writing and publishing. Upon my return to the Archdiocese of Cincinnati, I was happy to be invited to write once more.

I have been overwhelmed at the response to my columns, with cards and letters regularly arriving from all parts of the archdiocese. It has shown me that people are interested in faith and in growing as disciples.

When I was first ordained 20 years ago, I lamented the woeful state of catechesis. I thought, “Well, if people only had better catechesis, the problems of the Church would go away.” I also thought that people were a lot like horses: if you ride a horse hard enough and give him the spurs a few times, you can break the horse. I quickly realized that I was dealing with people, not horses. The people also had far more faith and devotion than I previously thought. This was especially true in Sidney, OH, where I was privileged to first serve.

Gradually, I came to understand that people are made to be loved, and that teaching the faith, through writing, could be a great service of love. These columns throughout the years have been a small way to say, “I love you,” and “Thank you,” to the People of God here in the Archdiocese of Cincinnati. I will miss writing these columns, but even more, I will miss the people of this archdiocese.

Having served eight of my 20 years as a priest outside the archdiocese, I have always longed to come home, but now I must be going. Since my nomination as Bishop of Columbus, I have been overwhelmed by the prayers, good wishes, cards, letters and gifts. Very often we only read negative news about priests in the papers or on social media; however, what these letters have taught me is that the People of God really love their priests.

Yes, they can be hard on priests at times, but mostly, they love them. I know that Beacons of Light will bring many challenges to the priests and people. I ask that you continue to love your priests, offer words of encouragement and pray for them. Your goodness sustained me for two decades in the priesthood. What a joy it is to be a priest!

When I worked at the Nunciature’s office, we read a lot of complaint letters about bishops. There is no shortage of those. I realized how difficult the mission of the bishops really was. Some of us like to be “armchair quarterbacks” during football season, but in reality, we could never do what Joe Burrow does. The same could be said of bishops. The reality of their lives and decisions are so much more difficult than we imagine. They need our prayers. I, too, now need your prayers more than ever and express my gratitude in anticipation of them.

As I begin my new mission, know that although I am once more away, you are never far from my heart. Goodbye. Farewell. Amen.

Completely yours in the Lord, Most Reverend Earl K. Fernandes Bishop of Columbus 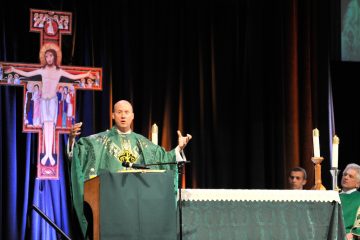