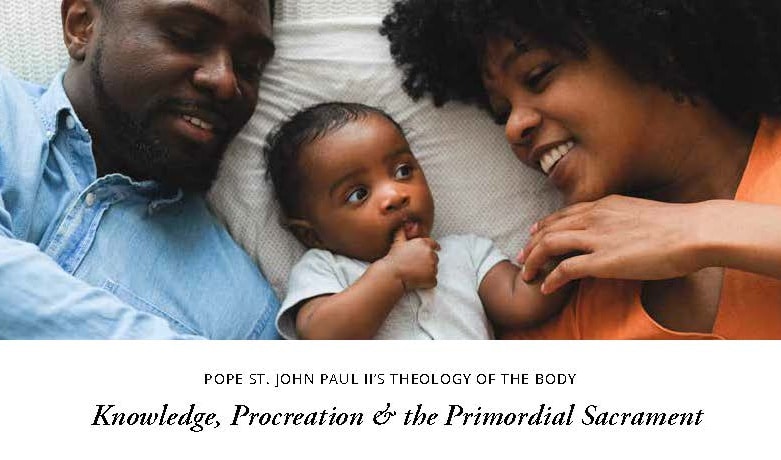 This article is part of an ongoing series on Pope St. John Paul II’s Theology of the Body (TOB).

In recent articles, we reflected on the logic of gift and the spousal meaning of the body. Our very existence is a gift from God that He lovingly gives us at every moment. The dignity of man, made in God’s image, requires that every human person always be received and treasured as a gift. When we are welcomed and accepted in this way, we discover our “giftness,” thus “finding” ourselves
(i.e., discovering our true dignity).

Since the logic of gift permeates the very structure of our being and essence, we find our deepest fulfillment when we cooperate with this logic by making a gift of ourselves to others in love. This takes place in a special way in the encounter between man and woman. Through our bodies we discover our equal and profound dignity, but also the reality of the sexual difference—our maleness and femaleness. This unity in human nature and difference of sex creates the capacity for spousal communion, which we fulfill by making a total gift of self to each other. This total gift of self through spousal love between a man and a woman is the essence of marriage.

Pope St. John Paul II reflected on the encounter of the first man and woman before the Fall and how they were naked before each other and felt no shame because they beheld more than just their sexual features. Rather, they saw in one another’s bodies “someone willed by the Creator ‘for his own sake,’ that is, someone unique and unrepeatable, someone chosen by eternal Love” (TOB 15:4). They beheld a person to be treasured as a gift, not used as a means to an end. Nonetheless, they were still moved by natural attraction of the sexes as they beheld the mystery of the person revealed through the masculine or feminine body. This desire, however, was properly ordered and in harmony with the dignity of the person, not tainted with selfishness, as in the case of fallen humanity. In that state, man and woman could come to “know” each other through conjugal relations in a pure, dignified way, infused with holiness and respect for the person.

According to the late pope, through the encounter by which the man and woman “know” each other, they discover the hidden power of procreation. While the features of her body point to the possibility of motherhood, the woman’s hidden capacity to conceive new life and nurture it in her womb is only gradually revealed over time. In this way, husband and wife discover through her body that their mutual “knowledge” in conjugal relations is intrinsically connected with the blessing of fruitfulness. The presence of the child reveals that their spousal gift of self is naturally oriented toward, and finds its crowning in, motherhood and fatherhood. Indeed, it is through receiving her husband’s self-gift and giving herself in return that the woman receives the gift of her motherhood. Similarly, it is through his wife that the man discovers and receives his fatherhood. In this way, each “finds” himself anew, now as a father or a mother. They find themselves, too, in the face of the child who is the image of their love.

Pope St. John Paul II saw marriage and family as the climax of creation. Before sin entered the world, the coming together of man and woman in marriage and subsequent begetting of new life was infused with God’s grace. Not only could it bestow earthly life to new human beings, but also, it was the means by which God intended to convey divine life to the entire human family. Thus, the pope referred to marriage as the “primordial sacrament,” by which he meant that in the beginning, marriage was the efficacious sign of God’s plan to share His own divine life with humanity, drawing all of us into the intimacy of His eternal, divine Communion. In light of this, let us pray and work to renew a sense of reverence for the sanctity of marriage and the awesome responsibility of cooperating with God to bring new life into the world.

Dr. Andrew Sodergren MTS, PSY>D is a Catholic psychologist and director of psychological services for Ruah Woods. He speaks on the integration of psychology and the Catholic faith. He and his wife, Ellie, have five children.

This article appeared in the August 2022 edition of The Catholic Telegraph Magazine. For your complimentary subscription, click here

Pope pleas on behalf of civilians in Aleppo as bombing intensifies