Rosie the Riveter, apparently, doesn’t want Kansas voters to approve the Value Them Both amendment.

Her iconic image representing American working women adorns a billboard along Interstate 435 in Kansas City, beside the words “VOTE NO” in large letters.

Located a short drive southwest of the airport in nearby Kansas City, Missouri, it’s a sign of things to come as one heads west toward the heart of the Sunflower State. To judge by the profusion of yard signs, both for and against the amendment, which comes up for a vote Tuesday, nearly everyone seems to have strong opinions about it.

But many of those aren’t hearing the truth of what Kansans are voting on Aug. 2.

Also known as Amendment 2, Value Them Both, if approved, would affirm that Kansas’ state constitution does not provide a right to abortion, reversing a 2019 ruling by the state’s Supreme Court.

The amendment would not ban abortion, as some are being misinformed, proponents of the amendment claim. Instead, it empowers state lawmakers to regulate abortion as they see fit, as is now possible after the U.S. Supreme Court on June 24 overturned a national right to abortion in Dobbs vs. Jackson’s Women’s Health Organization.

Opponents of the measure have seized on the Dobbs decision “to create a lot of confusion about the Value Them Both amendment and they have also spread a lot of misinformation,” Peter Northcott, executive director of Kansans for Life and campaign manager for the Value Them Both Coalition, told CNA.

Erin Newport, a Topeka resident and a volunteer with the Value Them Both campaign, said she has seen a lot of confusion and anger around the topic, saying there has been a great deal of misinformation — “manipulation, abuse of language, to make it confusing to people.”

Stanley Colaço, a volunteer with Susan B. Anthony Pro-Life America’s student team visiting voters to educate them about the amendment, said he has encountered misinformation, with voters believing the initiative would itself ban abortion or even contraception.

And Father Nathan Haverland, pastor of Most Pure Heart of Mary parish in Topeka, said “people are informed” that the amendment is on the ballot, “but still there are questions,” adding that there is a “misinformation campaign on the other side.”

You can watch an “EWTN News In Depth” interview with two pro-life students involved in the campaign in the video below.

Amendment 2 will be included in Kansans’ Aug. 2 primary ballots. It marks the first statewide vote on abortion in the United States since Dobbs was decided.

“We’ve had individuals who said that they were pro-choice, and they thought that this was going to be a 100% ban on abortion. In every case, when you have the conversation about the laws that currently exist on the books, people are like, ‘You know, that is very reasonable,’” he explained.

“Every one of our laws in Kansas passed with bipartisan support, and that’s really where the people of Kansas are. They want limits on the abortion industry and that’s the conversation you’re having with people; Kansans will say, ‘Yeah, that’s where I’m at.’ Not the scare tactics from the other side.”

The 2019 court decision that prompted the Value Them Both amendment has already led to two Kansas laws being struck down, Northcott said; one barring live dismemberment abortion, and one mandating clinic-specific licensing standards. A law requiring in-person prescription of medical abortion is currently being challenged.

In addition to misinformation coming from opponents of the amendment, the campaign has been marked by intimidation of and attempts to silence pro-life Kansans.

Churches have been vandalized, and “yes” signs have repeatedly been defaced or stolen, and sometimes even replaced with “no” signs.

Haverland of Most Pure Heart of Mary said the parish’s sign had been spray-painted over 10 or 12 times.

“We won’t let these things dampen our resolve,” he said. “We keep going. Everyone with a small sign has had it stolen at least once.”

“The tension is palpable,” he added.

The organization leading the campaign against the amendment, Kansans for Constitutional Freedom, did not immediately respond to a request for comment Monday.

Newport’s family has taken to bringing in the sign from their lawn each night. She commented on how heartening it was when a group of men from Most Pure Heart sat outside several nights after the Dobbs decision to protect the church’s sign in favor of the amendment.

“So many people are putting up the good fight,” she reflected. Some churches have put plastic around their signs to support and protect them, or put messages on electronic signs, and some Kansans have placed signs on high tree branches to dissuade would-be vandals.

Newport also expressed a supposition that there are more people who support the amendment who haven’t put up signs, because of the vandalism; some have also given up having signs in their yards after having them stolen so often.

Opponents of the amendment have aimed at “silencing an opposing view,” Northcott commented.

Pivotal state in a national debate

The intensity of the debate over Value Them Both harkens to Kansas’ key role in the national debate over slavery before the Civil War, said Mary Margaret Sperry, Newport’s daughter.

Most of its neighbors have restricted or banned abortion, and it could become an abortion destination if its legislature is not empowered to regulate the practice.

Value Them Both has garnered significant attention from outside Kansas.

Out-of-state money has poured into campaigns against the amendment. The Kansas City Star reported July 20 that Kansans for Constitutional Freedom, the main opposition group, has received most of its funding “from national and regional organizations aimed at preserving abortion access.”

Much of that money has gone into TV and radio ads.

According to Northcott, more than 99% of the Value Them Both Coalition’s funds have come from within Kansas, compared with 29% for the opposition.

The largest donors to Value Them Both have been Catholic organizations inside Kansas, but there have been thousands of dollars “from individuals across the state,” Northcott said.

“We get notes from people that are saying, ‘Hey, you know I’m only able to give $20,’ or ‘Our family is going to not go out to dinner this month so that we can help you all help protect moms and babies.’”

Value Them Both Association has received close to $4.7 million this year, while Kansans for Constitutional Freedom took in more than $6.5 million, according to state records. Susan B. Anthony Pro-Life America committed at least $1.3 million to the “yes” campaign, the pro-life group announced in June.

Northcott also highlighted support for Value Them Both coming from outside the Catholic Church. He noted support for the coalition coming from Southern Baptists, the Lutheran Church -Missouri Synod, and Mennonite, Bible, and independent churches.

“The idea that Kansas could continue to be this destination for abortion, and we could have some of the most extreme abortion practices, cuts across denominational lines.”

“There’s a box that I think that the media tries to put us in that this is just a Catholic effort, and it goes way beyond that,” Northcott explained.

Prayer vigils will be held the night of Aug. 1-2 for the success of the amendment. Ecumenical “Light the Night” events will take place, along with rosary vigils, 40 Hours devotions, and Eucharistic adoration.

Newport reflected that the spiritual aspect of the campaign is an asset to the pro-life side.

“Fasting and prayer,” she said. “Understanding that this is a spiritual battle. That’s the advantage for us.”

Baking cookies for St. John Paul II and other memories for his 100th birthday 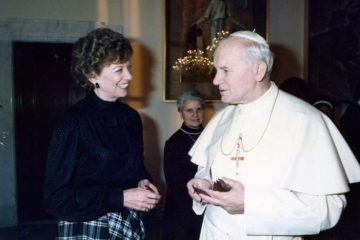