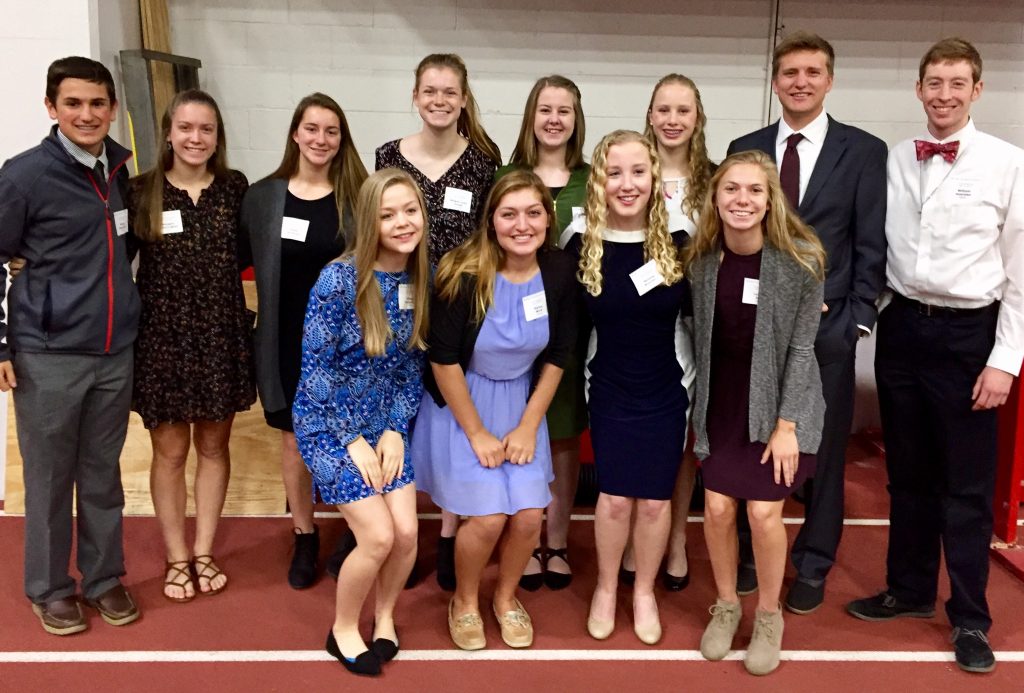 Twelve Lehman Catholic High School students participated in this year’s State Science Day held recently at French Field House on the campus of The Ohio State University. The 69th annual event involved over 1,200 science research projects exhibited by students in grades 7-12 from schools across the state of Ohio.

Seven of the twelve Lehman students received the top rating of superior. Junior Melanie Brunner was the top winner for Lehman receiving a perfect score with her project titled “The Effect of Water on the Denaturation Temperature of Protein” Brunner is the daughter of John and Julie Brunner of Sidney.

• Freshman Angela Brunner for her project “The Effect of Dimethyl Sulfoxide on the Regeneration of Planarium,” Brunner is the daughter of John and Julie Brunner of Sidney.

• Freshman Ann Deafenbaugh for her project “Does Noise Affect How the Body Works.” Deafenbaugh is the daughter of Rob and Nancy Deafenbaugh of Sidney.

• Freshman Lyndsey Jones for her project “The Effects of Oxygen on Yeast Metabolism.” Jones is the daughter of Brad and Kelly Jones of Conover.

• Junior Abigail Jones for her project “The Effects of P. Otreous on the Biosorphun of Petroleum Polluted Water.” Jones is the daughter of Brad and Kelly Jones of Conover.

• Hailey Wick for her project “Osmosis: Observing the Net Movement of Water Molecules.” Wick is the daughter of Michael Wick of Sidney, and Lori Frye of Sidney.

• William Hoersten for his project “The Filtration of Dirty Water Through Natural Media.” Hoersten is the son of Patrick and Jennifer Hoersten of Sidney

• Megan Neumeier for her project “The Effects of Milk Source on Lactose.” Neumeier is the daughter of Samuel and Mary Neumeier of Troy.

• Freshman Hope Anthony for her project “Which Weed Killer Works the Fastest.” Anthony is the daughter of Joe and Lisa Anthony of Piqua

• Freshman Mikey Rossman for his project “Is Bioremediation an Effect Way to Reduce Pollution in Water?”Rossman is the son of Tom and Lisa Rossman of Sidney.

• Senior John-Henry Frantz for his project “Does Solar Disinfection Work.” Frantz is the son of John and Julia Frantz of Sidney.

State Science Day is sponsored by the Ohio Academy of Science and is the academic equivalent of a state athletic championship. Over 35,000 students do science fair projects each year. Students must qualify for State by receiving superior ratings at their own school fairs and at their District events. Throughout the competition, they are evaluated on their scientific research and communication skills. More than 66,000 students have participated in the annual State Science Day since it was first held in 1949.

Pope: Christians without tenderness, respect are serpents who divide

Be prophets of joy, not misfortune, pope tells nuns

The Catholic Moment: The final reckoning