For centuries St. Francis of Assisi has pointed others to Christ. His writings, associated legends and popular sayings have inspired priests, laity and even the present Holy Father.

Popular culture knows the founder of the Franciscan orders for his commitment to poverty and love of animals, but these alone do not scratch the surface of his many years of service. Many biographies have been written about the saint, but Franciscan Father Pat McCloskey, has taken a different path with Peace and Good: Through the Year with Francis of Assisi. 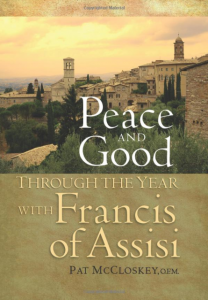 The book contains biographical information, and a heavily detailed timeline of the saint’s life, but is written as a daily devotional.

Each month has a theme, and each day includes a three-part reflection. The reflections begin with a passage by, or about St. Francis. The second and third parts are written by Father McCloskey, who is presently the Franciscan editor of St. Anthony Messenger magazine. The second part of each reflection is entitled Living as Francis Did, wherein the author expands on the opening passage. In the third, “Growing with Francis” readers are challenged to actively do or consider something in their lives to grow in faith.

A passage likely to resonate with St. Francis devotees is found in the Oct. 10 entry. Quoting Celano’s First Life of St. Francis, the reader learns the saint would sometimes preach to flowers, or cornfields. St. Francis’ relationship with nature is well-known but in the “Living as Francis Did” section, Father McCloskey writes;

“Some people are tempted to roll their eyes at stories of Francis and his relationship with plants and animals, thinking him a 13th century Dr. Doolittle.”

Expanding on that in an interview with The Catholic Telegraph, Father McCloskey said it is important not to reduce to St. Francis of Assisi to a collection of amusing stories.

“The temptation is to make Francis cute,” Father McCloskey said. “You can understand how people might do that or be attracted to some of these stories. The prophet Jeremiah wasn’t cute, Dorothy Day wasn’t cute. Francis of Assisi wasn’t cute. By making any of those three people cute, we’d be diminishing the power of their lives.”

In the nearly 800 years since his death, Francis of Assisi has been the subject of hundreds of books. With Pope Francis’ fame bringing the name Francis back into the spotlight, the saint is poised for continued examination in print.

“I think the staying power of St. Francis is he really puts people in touch with God, and in doing that he puts people in touch with themselves and with others,” Father McCloskey said. “This is always kind of a package deal… I think Francis has a continuing fascination because he was a very, very honest man. Those who hang around him, so to speak, are going to be encouraged to become more honest people.”

Peace and Good runs 397 pages and is published by Franciscan Media. First published in October 2014, the book is available at InnerVisions on Beechmont Avenue in Cincinnati, and St. Mark Bookshop in the Dayton area. It is also available through Amazon or at FranciscanMedia.org for $19.99.

This book review by John Stegeman originally appeared in the May 2015 print edition of The Catholic Telegraph.