CNA Staff, Jul 30, 2020 / 05:01 pm MT (CNA).- The president of Loyola University Maryland announced Friday that the Flannery O’Connor Residence Hall was being renamed, saying, “some of her personal writings reflected a racist perspective.”

The hall is to be renamed for Sister Thea Bowman, a member of the Franciscan Sisters of Perpetual Adoration and an African-American.

“During recent conversations around racism, one of the issues that caught the attention of our community was the name of Flannery O’Connor Residence Hall,” Fr. Brian Linnane, S.J., wrote July 24 to the university community. The school, which in 2019-20 had a total enrollment of 5,473, is in Baltimore.

“Information coming forward recently about O’Connor, a Catholic American writer of the 20th century, has revealed that some of her personal writings reflected a racist perspective. The building names we use at Loyola should declare to our students—and entire community—what sort of values we esteem and hope to instill in our graduates. A residence hall must be a home and a haven for those who live there, and its name should reflect Loyola’s Jesuit values,” Fr. Linnane wrote.

An online petition begun in June asked that the dorm be renamed. It has garnered almost 1,100 signatures. The petition’s founder, Regina McCoy, wrote that “Recent letters and postcards written by Flannery O’Connor express strong racist sentiments and hate speech. Her name and legacy should not be honored nor glorified on our Evergreen Campus.”

Attention was drawn to apparent racism in O’Connor’s personal writings by “How Racist Was Flannery O’Connor?”, a piece that appeared in the New Yorker in June. There, Paul Elie wrote that “letters and postcards she sent home from the North in 1943 were made available to scholars only in 2014, and they show O’Connor as a bigoted young woman.”

O’Connor was a short story writer, novelist, and essayist who died in 1964. A devout Catholic, she often attended daily Mass. In the nave of her parish, Sacred Heart, in Milledgeville, Ga., acknowledgement is made of her membership there, and her gravestone evidences interest in — if not devotion to — her, through the rosaries, holy cards, flowers, and notes that can be seen on it.

Her name will be replaced on the Loyola residence hall with that of Sr. Thea, whose cause for canonization was opened in 2018 by the Diocese of Jackson.

In his letter to the university community, Fr. Linnane wrote that Sr. Thea, who died in 1990, “was the granddaughter of slaves … An educator, speaker, and African American activist, Sister Thea inspired people to work to eliminate racism and work for justice and served as an important voice within the Catholic Church in the United States during the 20th century. She lived a life of great holiness, demonstrating deep compassion for the materially poor and those at the margins of society.”

He put the renaming of the residence hall in the context of taking “intentional action steps in our equity and inclusion work” and “envisioning a more just, anti-racist future at Loyola.”

Fr. Linnane added that he is forming a committee “to evaluate all philanthropic and honorifically named spaces on campus” which “will determine a process for maintaining and removing building names and develop a rubric for naming and renaming, leading a deliberative, inclusive process that centers our mission, values, diversity, equity, and inclusion in these decisions.”

He told the Catholic Review, the publication of the Archdiocese of Baltimore, that “particularly in [O’Connor’s] fiction, the dignity of African-American persons and their worth is consistently upheld, with the bigots being the object of ridicule.”

He added, though, that “a residence hall is supposed to be the students’ home. If some of the students who live in that building find it to be unwelcoming and unsettling (to have it named for Flannery O’Connor), that has to be taken seriously.”

In renaming the dorm, Fr. Linnane said the university was looking for “someone who reflects the values of Loyola and its students at the present time and whose commitment to the fight for racial equality – from an intellectual point of view and from a faith perspective – would be more appropriate for the residence hall.”

The Catholic Review reported that a letter signed by more than 80 authors and scholars was recently sent to Fr. Linnane, encouraging him to maintain O’Connor’s name on the dorm.

The letter was written by Dr. Angela Alaimo O’Donnell, associate director of the Curran Center for American Catholic Studies at Fordham University.

In it, O’Donnell wrote that “If a university (Catholic or otherwise) effectively banishes Flannery O’Connor, why keep Sophocles, Dante, Shakespeare, Dickens, Dostoevsky and other writers who were marked by the racist, misogynist, and/or anti-Semitic cultures and eras they lived in the midst of? No one will be left standing.”

Dr. Jennifer A. Frey, an assistant professor of philosophy at the University of South Carolina, wrote in First Things July 29 that she believes O’Connor’s life and work is “worth celebrating, in spite of the fact that she harbored some of the racist attitudes of her time and place.”

O’Connor “knew that we are all marked by sin and therefore in need of God’s merciful grace,” Frey stated.

She said O’Connor’s “letters and journals reveal a woman aware of and forthcoming about her own sins. We ought to prefer O’Connor’s self-deprecating and revelatory honesty over a self-congratulation fed and watered by self-deception.”

The petition to rename the Flannery O’Connor residence hall “presents an opportunity for Catholics to address the contemporary demand that those we honor be perfect and free from the stain of sin—especially the sin of racism,” Frey wrote.

“We should resist this impossible demand. We need moral exemplars to provide models for our own lives, but we must accept that those exemplars will inevitably be wounded by sin … We need to see those we honor in their wounded humanity, or we will never be able to see ourselves in them at all.” 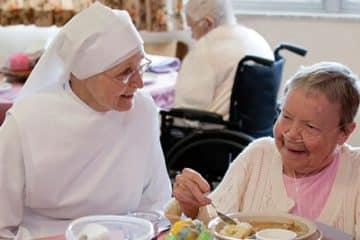