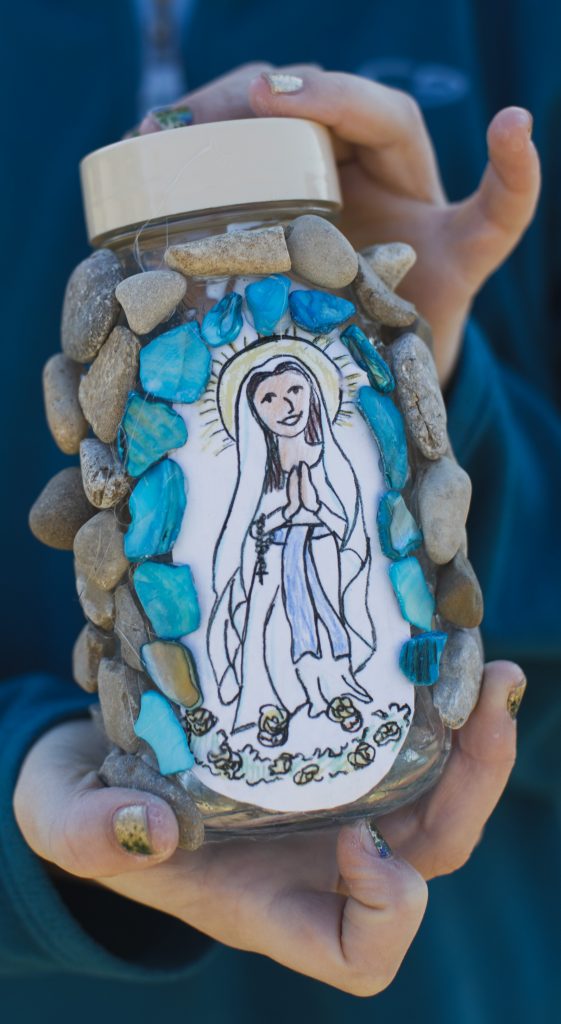 “What do you do with a broom when you are finished sweeping? You put it back where it belongs, behind the door.” This is the response St. Bernadette gave when asked about the many apparitions she received in the year 1858. This simple, frail young girl was just 14 when Mary appeared to her at the famous grotto in Lourdes, France!

St. Bernadette was impoverished, sickly and poorly educated. She lived in a one-room cottage with her parents and siblings. She suffered from tuberculosis and had to work hard to help her family. Despite her hardships, she was well loved.

One day, while gathering firewood with her sister and a friend, Bernadette heard a sound like a driving wind. She then saw a lady dressed in white with a blue sash around her waist. She had a yellow rose atop each foot. On her right arm was a rosary. Though Bernadette was at first scared by the vision, she responded by pulling out her own rosary and praying. The lady prayed along with her and vanished as soon as the rosary was completed. Upon returning home, Bernadette sought the advice of the local priest, who asked for proof. Others persecuted her and called her a liar. Nevertheless, she returned to visit the Lady 18 times and continued to report what she experienced and heard. In the end, the Lady revealed, “I am the Immaculate Conception,” a title promulgated by the Pope only four years earlier.

Because of her devotion and continued obedience to Our Lady, Bernadette also uncovered a spring that has been the source of at least 67 confirmed medical miracles. Today, people still visit the grotto at Lourdes and bathe in the spring, praying for healing.

Bernadette desired only to do what God wanted. She said of herself, “The Blessed Virgin made use of me, and now I’m going back to the place where I belong.” For her, that was the cloistered Sisters of Charity of Nevers. She prayed and worked tirelessly to care for the infirm and offered her silent sufferings to the Lord in reparation for sinners.

To commemorate this beautiful young saint, we made our own holy water grottoes from simple glass jars, some stones and a little glue. We hope these will remind our children of the greatness they can find in simply knowing and loving the Lord and allowing ourselves to be “brooms” in the hands of Our Lady.