March 10 is the liturgical memorial of Saint John Ogilvie, a 16th- and 17th-century Scotsman who converted from Protestantism to Catholicism, served as a Jesuit priest, and died as a martyr at the hands of state officials.

St. John was executed for treason, refusing to accept King James I’s claim of supremacy over the Church. Pope Paul VI canonized him in 1976. A Catholic priest, he is the only post-Reformation Scottish saint.

In February 2010, during a visit to Rome by the Scottish bishops’ conference, Benedict XVI asked the bishops to promote devotion to St. John Ogilvie among priests – since the Jesuit martyr had been “truly outstanding in his dedication to a difficult and dangerous pastoral ministry, to the point of laying down his life.” Later that year, during the Scottish segment of his U.K. visit, the Pope again encouraged priests to look to the saint’s “dedicated, selfless and brave” example.

John Ogilvie was born in 1579, a member of a noble family. Some of his relatives had kept the Catholic faith, while others adhered to John Calvin’s interpretation of Protestantism as Presbyterians. Though raised as a Calvinist, John had doubts about the compatibility of this system with Scripture. In particular, he could not reconcile Calvin’s theology of predestination with Biblical passages teaching that God loves all people and wills each of them to be saved.

This difficulty, coupled with the contrast between Catholic unity and the multiple Protestant sects and denominations, influenced John’s decision to enter the Catholic Church. He made the decision at age 17 while studying in Belgium, and in 1599 he became a novice in the Society of Jesus. After extensive study and training he was ordained a Jesuit priest in Paris during 1610.

John greatly desired to go back to his native country and encourage its return to the Catholic Church. He served for a time as a priest in France, while requesting to be sent back to Scotland. Others within his order made it clear to him that such a mission would be dangerous and unlikely to produce much fruit. In 1613, however, John obtained the assignment he desired.

He soon discovered the truth of the warnings he had received from other Jesuits, about the difficulty of Catholic evangelization in Scotland. Many members of the upper classes were not interested in returning to the Church, though he did carry out pastoral work among a largely poor population of Scots who had kept the faith. After a period in England he returned to France, seeking directions on how to proceed in light of his lack of success.

The French Jesuits ordered John back to Scotland, however, where he resumed his ministry to the underground Church as well as the smaller number of people interested in converting. His arrest came about when one potential “convert” turned out to be an informer, who had John arrested and interrogated.

The first criminal accusation St. John Ogilvie faced was that of celebrating Mass within the King’s realm. Unwilling to incriminate himself, he suffered two months of imprisonment. An iron bar was attached to his feet to prevent him from moving in his cell. Despite this ordeal, he strongly resisted pressure to give evidence against other Scottish Catholics.

Severe torture was then inflicted on John. His hair and fingernails were pulled out, and for a period of nine days he was prevented from sleeping by continual stabbing with sharp stakes. His jailers beat him, flung him to the floor of his cell, and shouted in his ears. Nothing, however, could make him renounce his faith or betray his Catholic countrymen to the authorities.

John’s tormentors were impressed by his fortitude, and by the surprising sense of humor that he showed in the face of the brutal punishments. But they could not spare his life, unless the Jesuit priest gave an acceptable response to a series of questions provided by King James I. John declared his loyalty to the king, but steadfastly rejected James’ claim to supremacy over the Church in religious matters. The priest was eventually convicted on a charge of high treason.

Attempts to ply John with bribery – in exchange for his return to Protestantism, and his betrayal of fellow Catholics – continued even as he was being led to his execution. His own defiant words are recorded: for the Catholic faith, he said, he would “willingly and joyfully pour forth even a hundred lives. Snatch away that one which I have from me, and make no delay about it, but my religion you will never snatch away from me!”

Asked whether he was afraid to die, the priest replied: “I fear death as much as you do your dinner.” St. John Ogilvie was executed by hanging on March 10, 1615.

As a last gesture before his hanging, St. John had tossed his Rosary beads into the crowd where they were caught by a Calvinist nobleman. The man, Baron John ab Eckersdorff, later became a Catholic, tracing his conversion to the incident and the martyr’s beads.

Being Pro Life: The Role of Men and Fathers 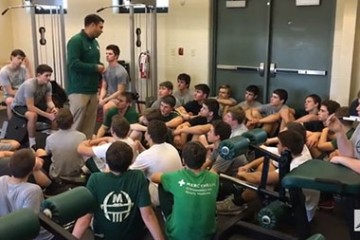