Mark Houck, the Catholic pro-life father of seven who was arrested last month after a controversial early-morning FBI raid at his home, says Mother Teresa’s nuns in the Missionaries of Charity have placed a photo of his family on her tomb in Kolkata, India.

“They placed it right on the crypt and every morning they pray over that image,” he said.

Houck made the comments Saturday in Boston, where he was a featured speaker at a pro-life event known as The Men’s March.

Houck was arrested Sept. 23 on charges he violated the federal Freedom of Access to Clinic Entrances (FACE) Act by allegedly assaulting a Planned Parenthood clinic escort in an altercation outside a Philadelphia abortion clinic in October 2021. Houck, who maintains he shoved the man to stop him from verbally haranguing one of Houck’s sons, has pleaded not guilty to the charges.

Since his arrest at his family home, the Department of Justice and the FBI have faced severe criticism from lawmakers, clergy, pro-lifers, and media personalities, while Houck has received support from Catholic bishops and most recently German Cardinal Gerhard Müller, who paid a visit to the Houck family Oct. 12 at their home in Bucks County, Pennsylvania. Meanwhile, an online fund drive has raised more than $382,000 for the family.

The Boston event, officially The National Men’s March to Abolish Abortion and Rally for Personhood, is a national pro-life march that calls men to stand for life. Last year’s march was held in Baltimore during the U.S. bishops’ fall assembly.

Houck began his speech by talking about his trust in Jesus in the midst of his family’s trials.

“First of all, be not afraid. What’s happening to me is a good thing. It’s a way to know you’re in God’s holy will. Amen?” he told the crowd.

“When they come after you and they persecute you, you know you’re in the will of God. And my wife and my children, my seven babies, we have great trust in the Lord. So be not afraid. Stand in the gap. And that’s where you’re called to be as men,” he said.

One man, who called himself “a lousy Catholic,” told Houck that “after seeing what happened to you, I’m going back to the Church,” Houck told the marchers, who wore suits for the event.

“We will stay the course. We will fight the good fight. We will run the race,” Houck said.

You can watch Houck’s full speech on Facebook here.

Why is St. Luke the patron saint of butchers? Here’s a clue

Equestrian Order of the Holy Sepulchre of Jerusalem Mass 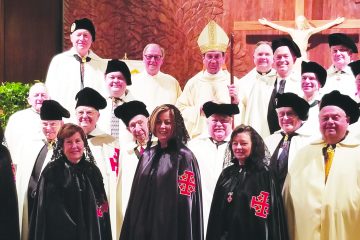