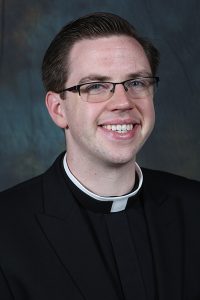 What led you to pursue the priesthood?

In a word: an encounter with authentic truth and beauty. In a few words: I struggled with the call to the priesthood throughout high school. I eventually decided to go to university, trying my best to ignore the call. There were two things holding me back from answering our Lord:

Firstly, from those around me, it did not seem like the faith, in all its truth, could be authentically lived out in this day and age. Holiness seemed like a relic of a by-gone era. This changed, however, when I got to know some FOCUS missionaries at Ball State. They showed me that it was indeed possible to live a life focused on God and concerned with His commandments in today’s world.

Secondly, the Mass in particular did not seem beautiful to me. This seemed odd because I knew that the Mass was supposed to be the place of encounter with God and that God must be beautiful. If God was not the most beautiful thing in the world, then that thing could not be God. So when I went to Mass and did not see beauty, I had trouble believing that the Mass was that encounter with God. My life changed when I went to a traditional Latin Mass for the first time. I didn’t understand a word of Latin; I had no idea why the priest was facing another way, or why we knelt most of the time. I only knew one thing: that what I was then experiencing was beautiful. And it was in finding this beautiful pearl that I found our Lord and was able to answer His call.

What has the journey been like as you neared ordination?

It has been a continual realization of the love of God who calls me. This call of love is also a call to embrace the Gospel which is at once too great and beyond any of us, but by God’s grace, can be lived. It’s a call that has demanded the virtue of courage to trust God when He says, “Come, follow Me” despite the apparent impossibility of doing so. If He is calling, He will give us the grace to follow.

Was there a single person who greatly influenced your decision to become a priest?

While there was not a single person who greatly influenced me, there were many people along my journey who helped to point the way to where God was calling me.

What message would you offer to those who want to serve God but do not know how?

Pope Benedict XVI once said that “the world offers you comfort. But you were not made for comfort. You were made for greatness.” However you serve the church, don’t back down from the greatness for which you were created. Don’t be the man who took his talent and buried it out of fear of how great (and demanding) the Master is. He only demands because He will give us the grace to accomplish.

How has being a deacon (or your practical internship) influenced the type of priest that you will be?

One of the best things about internship was learning how to structure my life in such a way that I could be available to people whenever they found me. This usually entailed waking up very early to work on things I needed to get done, but did not require social interaction. The sacrifice always seemed worthwhile as it freed me to be available to people when I met them. It gave me the time I needed to meet them where they were at and to be able to give them the time necessary to accompany them.

What are some of your thoughts about beginning priestly life?

I am extremely excited. This has been something I have been preparing to enter into the past eight years. That’s eight years of anticipation and buildup.

What advice would you offer about discerning a vocation?

One of the most important things we can do is look to the church to instruct us how to pray. She has so many good tools: lectio, adoration, the rosary, confession and the other sacraments, just to name a few.

I think I will most miss that prayer time here is a given. In the seminary, when it is time to pray, there are few, if any, exceptions. My experience in the parish is that prayer can be interrupted by anything from legitimate crises, to people just wanting to talk. This is all good, (but) I will miss guaranteed prayer time. However, I will be very excited to embrace the people of God wherever I find them.

Archbishop Dennis M. Schnurr will celebrate the ordination Mass for Cincinnati’s three new priests at 11:00 a.m. on May 20, 2017 at St. Peter in Chains Cathedral.

From Field to Dreams to new church: St. John the Baptist, Harrison