A nursing home, originally built to care for infirm Franciscan Sisters of the Poor in 1971, will be razed this summer because the cost to upgrade it is too high.

The building, now known as Mercy Franciscan Terrace was operated by Mercy Health and was home to 140 people who all had to find new places to live. “It was heartbreaking when they announced it,” said Sister Joanne Schuster, congregational councilor for the United States for the Franciscan Sisters of the Poor. “It’s sad, but you know, it’s an economic decision. It was 75 percent Medicaid and it’s hard to keep it going financially.”

Mercy Health took over the operation of the building in 1999 when its parent company, Catholic Health Partners, signed a 25-year lease. They invested $1.4 million in the building since 2007, and over that same time lost more than $1.1 million in operations. Emergency repairs were required last year on the elevators and air conditioning. With assessments to the building revealing that $500,000 was needed for immediate repairs and an additional $2 million was predicted to cover needs in the next few years, the decision was made to close it.

“It’s sad. It’s a part of our history,” said Sister Arlene McGowan, who is a bit of an historian. But, she said, she understands the costs involved and the sisters, who own the building and the land on which it sits, don’t have the money to fix up it either. Catholic Health Partners will pay the cost of tearing down the nursing home. An activities center attached to the Terrace will remain.

“We’re going to have them grade it and have green space back there,” said Sr. Arlene.

In keeping with its mission to serve the poor and the underserved, Catholic Health Partners said that every effort was made to help residents find new places to live and the employees, new places to work.

“I think it reflects on our mission. Just because we made a business decision we’re the same people who go to work every day to live our Mission,” says Kelly Martin, regional director of marketing and communications at Mercy Health. Martin said some residents are moving in clusters to other facilities and some employees are being hired at those same facilities. Every one of the residents has found a new place to live, and as of early April, fewer than a dozen had yet to move. Sixty percent of the 166 employees have found other jobs, either within the Mercy system or at other facilities.

The Terrace offered three levels of care — independent living, assisted living and skilled nursing care. Sister Joanne worries that caring for the elderly could become a social crisis as baby boomers age because the cost of care is so expensive.

Mercy Franciscan Terrace sits on 35 acres that also features the congregation’s convent, a 100-year old renovated barn and the St. Clare Center that includes apartments for 11 sisters. Though the Terrace was built for the sisters, the order began caring for Franciscan friars shortly after opening the nursing home. Not long after that the doors opened to lay people. The sisters held a blessing and ritual in early April on the grounds of the nursing home to express their gratitude and sadness and pray for those residents who lived at the Terrace. A more official celebration took place April 18 to which the public was invited. 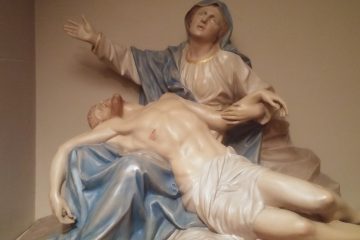