CNA Staff, Nov 20, 2020 / 02:00 pm MT (CNA).- A deacon who was stabbed outside a Michigan church this month is recovering in a rehabilitation hospital, the Diocese of Kalamazoo reported this week.

“We’re happy to share that Deacon Joe Schmitt is doing well. He’s been released from the hospital and working with rehabilitation services to work on improvement in strength and endurance. We’re grateful for all those who have prayed for Deacon Joe and his wife Becky and we continue to hold him in prayer for continued healing,” the diocese said in a statement released Nov. 17.

The deacon, who is assigned to a different parish, went to St. Mary’s the evening of Nov. 5 for a Mass. But according to his wife, he had gotten the date of the Mass wrong, and there was no one at the parish when he arrived.

Becky Schmitt, the deacon’s wife, told WWMT News that as he stood outside the church, a man approached and demanded her husband’s wallet. After the deacon said he wasn’t carrying a wallet, the mugger stabbed him repeatedly in the neck and shoulder, she said.

“Joe was able to stand back up, he lost his shoe, lost his glasses, lost his alb and stole and was able to walk,” she told WWMT. “He knew there was a daycare nearby, so he was able to go there. He said he was holding his mask over his wound.”

After daycare workers called 911, the deacon was taken to a hospital only seven blocks away. He had emergency surgery for a punctured trachea, and several stab wounds. Doctors told Schmitt’s family the deacon had lost 20% of his blood.

This week he was transferred to a rehabilitation hospital.

Kalamazoo police are searching for a suspect.

Schmitt, who was ordained a deacon in 1989, is expected to return home next week. His wife said parishes and other organizations have reached out with support. She also said she hopes for both justice and mercy for her husband’s attacker.

“I think there are a lot of desperate people around because of the circumstances of coronavirus, poverty, job loss, racism, all that stuff,” she told WWMT, encouraging prayer for both justice and mercy. 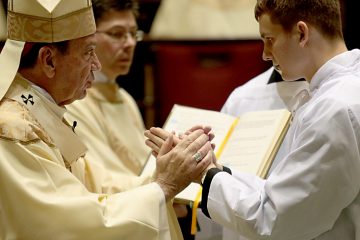