U.S. Catholic voters are split on the Supreme Court’s decision to overturn Roe v. Wade, but a majority agrees that abortion should be restricted and that there should be at least some protections for the unborn child in the womb, according to a new EWTN News/RealClear Opinion Research poll.

When asked whether they agreed or disagreed with Roe being overturned, 46.2% agreed, 47.8% disagreed, and 6% said they weren’t sure.

At the same time, the poll results point to apparent inconsistencies in Catholic voters’ positions on abortion.

While nearly half of Catholic voters in the poll said they disagreed with Roe being overturned, a large majority (86.5%) said they support some kind of limit on abortion, even though Roe and related abortion cases allowed only narrow regulation at the state level. The breakdown is as follows:

Of special note for Catholic pro-life leaders, only a small minority of Catholic voters — 7.8% — were aligned with the clear and consistent teaching of the Catholic Church that abortion should never be allowed.

On the other end of the spectrum of abortion views, 13.4% of Catholic voters said that abortion should be available to a woman at any time during her pregnancy.

The poll, conducted by the Trafalgar Group from Sept. 12–19, surveyed 1,581 Catholic voters and has a margin of error of 2.5%. The questionnaire was administered using a mix of six different methods, including phone calls, text messages, and email.

A previous EWTN News/RealClear Opinion Research poll released in July found that 9% of Catholic likely voters said abortion should never be permitted and 18% said that abortion should be available at any time. The poll similarly showed that a majority of Catholic voters (82%) support some kind of restriction on abortion.

Confused about what Roe said?

“This study confirms a phenomenon we have known for some time, i.e., that there is an enormous disconnect between the scope of abortion practices permitted by the Roe regime and what abortion practices Americans actually support,” Kirk, director of the Center for Law and the Human Person at The Catholic University of America, told CNA.

Kirk, who also serves as a faculty fellow for the Institute for Human Ecology and research associate and lecturer at the Columbus School of Law, noted the finding that nearly 42% of Catholic voters said they are less likely to support a candidate who agrees with Roe being overturned.

Why the inconsistency? “Most people do not realize that Roe allowed states to permit unlimited abortion access throughout the entire pregnancy and made it difficult, or even impossible, to enact commonsense restrictions supported by the majority of Americans,” Kirk observed.

“Many people who ‘support Roe’ actually disagree, unknowingly, with what it permitted,” she added. “All Dobbs has done is return abortion policy to the legislative process so that the people may enact laws which reflect the public consensus.”

In addition to respondents’ apparent confusion about what Roe stipulated, the poll suggests that many Catholic voters don’t fully understand what their Church teaches about abortion.

Overall, 32.8% of respondents reported attending Mass at least once a week, with another 30.7% attending once a year or less. Only 15% agreed that they accept all of the Church’s teachings and live their lives accordingly, with another 34.5% saying they generally accept most of the Church’s teachings and try to live accordingly.

The poll asked Catholic voters about a variety of other topics including abortion limits, Holy Communion for pro-abortion politicians, conscience protections for health care workers, and pro-life pregnancy centers.

Work to be done

What is the takeaway from the latest poll, where abortion is concerned?

“This polling shows that Catholics, like the overwhelming majority of Americans, support commonsense protections for women and the unborn,” Ashley McGuire, a senior fellow with The Catholic Association, told CNA.

“It also affirms other recent polling that found Americans by strong numbers support the work of pregnancy resource centers in providing women facing crisis pregnancies with a real choice and the chance to thrive as mothers despite difficult circumstances,” she noted.

Commemoration of the 500th Anniversary of the Reformation 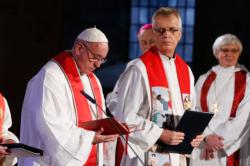