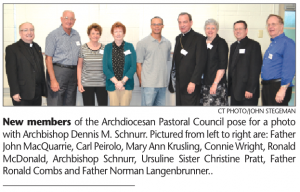 The Archdiocesan Pastoral Council, a 40-plus member advisory board to the archbishop, picked up eight new members on Saturday, Sept. 7.

Members of the board are recommended by the heads of the archdiocese’s various deaneries and are appointed by the archbishop to three year terms. Terms may be renewed once for a maximum term of six years.

Before the meeting, new members had an orientation meeting with Archbishop Dennis M. Schnurr, the council’s executive secretary Father Ray Larger and executive committee members. The archbishop thanked the new members for giving of their time to join the council and said he values their opinions.

“To all those who this is your final meeting I want to thank you for your time on the council,” Archbishop Schnurr said. “It is a very important sounding board for me. I do travel rather extensively throughout the archdiocese but at the same time, many times I don’t have a lot of time to speak with individuals. This gives me an opportunity to learn more about what’s going on in the archdiocese.”

During his report at the conclusion of the open forum section of the meeting, Archbishop Schnurr gave an update on his activities since the previous meeting.

After thanking the outgoing members of the council, he referenced his photo on the cover of the September edition of The Catholic Telegraph with a young girl at the Su Casa Hispanic Center.

“That picture was taken at Su Casa Hispanic Center…,” Archbishop Schnurr said. “If you need to be convinced about the need for immigration reform, all you have to do is go visit that center and see the challenges that the Hispanic community is going through and how families are divided.”

The council heard two presentations at the Sept. 7 meeting.

Sean Renyolds of the office of Youth and Young Adult Ministry and his team presented an overview of the Youth Athletics Initiative and the Youth Athletics Charter that is currently awaiting approval from the archbishop. The charter would  provide an oversight to ensure that evangelization and Catholic identity become the central focus of youth sports.

The second presentation was from Greg Ernst, executive director of St. Rita’s School for the Deaf. The K-12 school currently has 177 students and graduates 80 percent of its seniors into post-secondary education.

This story originally appeared in the October 2013 edition of The Catholic Telegraph.