NEW YORK (CNS) — The Archdiocese of New York has posted an FAQ providing a timeline of Cardinal Theodore E. McCarrick’s ministry in the church, information on how the archdiocese learned of an abuse allegation against the prelate now deemed credible and the church’s procedure for addressing abuse claims.

Early June 20, Cardinal McCarrick, retired archbishop of Washington, said in a statement he will no longer exercise any public ministry “in obedience” to the Vatican after an allegation that he abused a teenager 47 years ago was found credible. “While shocked by the report, and while maintaining my innocence,” the prelate said, he said he cooperated with the investigation into the claim.

Here is the FAQ posted at https://archny.org/tm-faq:

Q: When did Cardinal McCarrick serve in the Archdiocese of New York?

A: He was ordained a priest for the Archdiocese of New York on May 1, 1958, and he remained a priest of the archdiocese until his appointment as the bishop of Metuchen, New Jersey, in 1981. While a priest of the archdiocese, his assignments included: serving as assistant chaplain, dean and director of development at The Catholic University of America in Washington (1958-1965); president of the Pontifical Catholic University of Puerto Rico (1965-1969); associate secretary for education for the archdiocese and parochial vicar of Blessed Sacrament Parish, Manhattan (1969-1971); secretary to Cardinal Terence J. Cooke (1971-1977); auxiliary bishop (1977-1981).

Q: How did the Archdiocese of New York learn of this allegation?

A: The allegation came to us through the Independent Reconciliation and Compensation Program (IRCP), which was established by the Archdiocese of New York two years ago as part of its ongoing effort to renew its contrition to those who suffered sexual abuse as a minor by a priest or deacon of the archdiocese and bring a sense of healing, resolution and compensation to victim-survivors. The program is administered by Kenneth Feinberg and his associate, Camille Biros.

Q: How did the Archdiocese of New York respond to the allegation?

A: The first step was to notify the district attorney. Then, because this allegation involved a cardinal, the archdiocese contacted the Holy See, which has exclusive authority in the oversight of a cardinal. The Holy See delegated New York Cardinal Timothy M. Dolan, as the archbishop of the diocese where the alleged abuse occurred, to investigate the matter, following the requirements of the “Charter for the Protection of Children and Young People” and the policies of the Archdiocese of New York. This includes reporting the matter to law enforcement, and having the entire matter examined by outside professional investigators and the Archdiocesan Review Board, which found the allegation to be credible and substantiated.

Q: Can you provide details of the allegation?

A: Out of respect for the privacy of the victim, we will not release specific details about the allegation. Of course, there is no prohibition or restriction on the victim, who can choose to speak about any aspect of the case, including the allegation and how the case was handled by the IRCP, the Review Board, and the archdiocese.

A: As with all cases of substantiated abuse by a priest or deacon, the matter is now in the hands of the Holy See, which has final authority to determine what “punishment” to impose. This could range from living a life of prayer and penance, to a dismissal from the clerical state. Cardinal McCarrick has already been directed by the Vatican Secretary of State, Cardinal Pietro Parolin, that he is no longer to publicly exercise his priestly ministry.

Q: Where is Cardinal McCarrick now?

A: Cardinal McCarrick is the retired archbishop of Washington and continues to reside with them. He is 87 years old and in frail health. (He turns 88 July 7.)

Q: Isn’t this all just another black eye for the Catholic Church?

A: This news will certainly be shocking and painful, especially to Catholics, and will cause many to wonder if this tragedy of abuse will ever end. At the same time, however, it should be noted that, fortunately, the policies and procedures put into place by the church are working. Although this case involves activity from nearly a half-century ago, the allegation was taken seriously, the matter was thoroughly and carefully investigated, and the decision is being publicly announced. No one, not even a cardinal, is above the law or our strict policies. The church can never be complacent, and must always do all that it can to prevent abuse, and respond with compassion, sensitivity and respect to victim-survivors who come forward. In this, it can be a model for others who are looking to respond to this sin and crime that affects all segments of society.

DiNardo: All clergy, no matter their 'standing,' must protect children

Graduation in the Archdiocese of Cincinnati 2017; 3,144 Graduate this spring 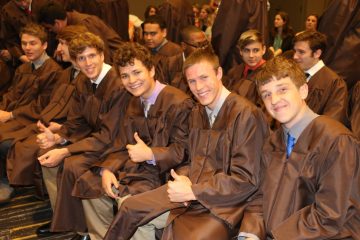