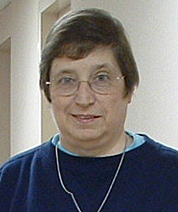 A memorial Mass for Precious Blood Sister Marjorie (M. Paulita) Huelsman will be held at the Salem Heights chapel, 4960 Salem Ave., Dayton, Ohio, on Friday, February 2, 2018, at 10:30 a.m. Visitation in chapel begins at 9 a.m. followed by the Sharing of Memories at 10 a.m., immediately preceding the Mass. Sister died at the Maria-Joseph Center in Dayton, Ohio, on Tuesday, January 30, 2018. Sister Marjorie had been a Sister of the Precious Blood for 56 years.

Marjorie Kathleen Huelsman was born to Louis and Adeline (Quinter) Huelsman on February 8, 1941, in Celina, Ohio, where she joined her only sibling, her brother Louis, Jr. Marjorie entered the Sisters of the Precious Blood in Dayton, Ohio, on January 1, 1961, at the age of 20 and was given the name Sister Mary Paulita. Later she returned to the use of her baptismal name, Marjorie.

Sister Marjorie served in a wide variety of ministries over her years in the community including in the classroom teaching art to grade schoolers, working as a nurses’ aide, caring for her aging parents and in a variety of domestic duties. Sister Marjorie most enjoyed anything that had to do with art and creative drawing at which she was accomplished.

In the mid-2000s, Sister Marjorie moved to Salem Heights due to failing health and eventually became a permanent resident at the Maria-Joseph Center next door. She accepted her physical decline with the same grace that she accepted all of life — as an opportunity to do something beautiful for God and others.

Sister Marjorie was preceded in death by her parents and her brother Louis and is survived by her Precious Blood Community of Sisters and her nieces and nephew and their families.