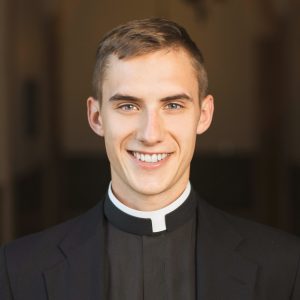 I’m originally from St. Philomena Parish. However, I didn’t grow up Catholic, and came into the Church at Sacred Heart Church in Camp Washington, while I was in college at Xavier University. Having the opportunity to serve on parish internship at St. Columbkille in Wilmington gave me a home there, as well. I’ve been truly blessed with three “home parishes” and three strong communities supporting my priestly vocation.

WHEN DID YOU FIRST DISCERN YOUR VOCATION?

When I was instructed in the faith before being received into the Church, I was powerfully struck by the beauty of the Catholic priesthood. Furthermore, I was part of a small group of Catholic men at Xavier. All these men were – at one point or another – in the discernment process, and took both their faith and their vocations seriously. Only a few weeks after I was received into the Church, I was overwhelmed with the desire to serve our Lord as His priest. Years later, that desire has remained.

WHO HAS BEEN A MENTOR FOR YOU?

My older brother, Henry, has been a great mentor throughout my conversion and discernment. He is a convert, as well, (received into the Church two years before me) and he influenced both my conversion and my decision to apply to seminary. By God’s providence, we will both be ordained this spring – he for the Oratory of St. Philip Neri in Cincinnati, and me for the archdiocese.

WHAT ARE YOU LOOKING FORWARD TO MOST ABOUT BEING A PRIEST?

Saying Mass is first on the list, of course. Though constantly feeling unworthy, I am still very excited to pronounce the words at which the Word becomes flesh. I also look forward to being a confessor. I have so often received mercy through that sacrament, that I long to share it with others.

WHAT ARE YOUR FAVORITE DEVOTIONS OR PRAYERS?

The Litany of the Sacred Heart is among my favorites: it is a reminder of the love Christ poured out of His opened side on the Cross, a love that continues to nourish the Church with an overflowing torrent of grace.

WHAT’S A HOBBY OR ACTIVITY YOU ENJOY?

Although there are many reasons for disappointment, both in the Church and in the world, we can constantly return to our baptisms as a source of joy. Whatever happens to us, nothing can undo the mark God has laid on us, the love by which He has made us His children. The joy stemming from that assurance should be enough to light the world on fire.

On May 15, Seven Men Will be Ordained to the Priesthood and Begin Their Service in the Archdiocese of Cincinnati

This article appeared in the May 2021 edition of The Catholic Telegraph Magazine. For your complimentary Subscription, click here.

May 8: St. Peter of Tarantaise, bishop

June 24: The Most Sacred Heart of Jesus

First Vespers for the Solemnity of the Immaculate Conception: Tuesday, December 7