WASHINGTON (CNS) — Pope Francis has appointed Father James P. Powers, a priest of the Diocese of Superior, Wisconsin, and currently its administrator, to be bishop of the diocese.

The appointment was announced Dec. 15 in Washington by Archbishop Carlo Maria Vigano, apostolic nuncio to the U.S.

A native of Baldwin, Wisconsin, Bishop-designate Powers, 62, was ordained a priest of the Superior Diocese May 20, 1990. He has served as administrator of the diocese since December 2014, a month after Bishop Peter F. Christensen was named to head the Diocese of Boise, Idaho.

Bishop designate-Powers’ episcopal ordination and installation is scheduled for Feb. 18. More details about the ceremony will be announced.

He said in a statement he greeted the news of his appointment with “mixed feelings” and felt “humbled to be called to the order of bishop.” He said he appreciated “the confidence being placed in me” and looked forward to accepting his new role “with joy and gratitude.”

He called it “an honor and privilege” to be Superior’s bishop and asked Catholics in the diocese to pray “that I will always be a faithful servant to the people of God entrusted to my care.”

Bishop-designate Powers said he was grateful to the late Bishop Raphael M. Fliss of Superior and Bishop Christensen, and the priests, religious and laity of the diocese who have supported him in his priestly ministry for 25 years.

To be Superior’s bishop is an “honor and privilege, he said. “I ask your prayers for me that I will always be a faithful servant leader to the people of God entrusted to my care.”

“The Archdiocese of Milwaukee shares in the joy experienced by the Diocese of Superior in the selection of their native son, Father James Powers, as the 11th bishop of Superior,” said Milwaukee Archbishop Jerome E. Listecki.

“Pope Francis has appointed a man who has proven himself to be a wonderful pastor and a capable administrator. I look forward to collaborating with him for the good of the Catholic faithful of Wisconsin,” he said in a statement.

Bishop-designate Powers holds a bachelor’s in theology and a master’s of divinity from St. John Vianney Seminary at the University of St. Thomas in St. Paul, Minnesota, and at St. Paul Seminary in St. Paul. He pursued graduate studies in canon law at St. Paul University in Ottawa, Ontario.

After his ordination, his pastoral assignments included serving for three years as associate pastor at St. Joseph Church in Rice Lake, Wisconsin. From 1993 to 1994, he was parochial administrator of four parishes in Wisconsin.

For the next four years, he was pastor of St. Bridget Church in River Falls, Wisconsin. In 1995, he was elected to the diocesan priest personnel board and in 1999 was re-elected to the board. In 1998, he served as adjunct vicar general for the diocese.

From 1998 to 2003, he was pastor of three Wisconsin parishes: St. Pius X in Solon Falls, St. Mary in Minong and St. Anthony of Padua in Gordon. From 2003 to 2014, he was administrator of those parishes as well as pastor of St. Joseph Church in Rice Lake.

He was appointed vicar general for the diocese in 2010.

While serving as diocesan administrator, he has remained pastor in Rice Lake and been pastor for three other churches in Wisconsin: Our Lady of Lourdes in Dobie, St. John the Evangelist in Birchwood, and Holy Trinity in Haugen.

Eight Admitted to Candidacy for Holy Orders at seminary 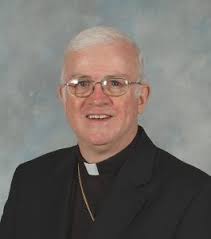