VATICAN CITY (CNS) — Pope Francis will visit Sweden in October to participate in an ecumenical service and the beginning of a year of activities to mark the 500th anniversary of the Protestant Reformation.

Leaders from the Catholic Church and the Lutheran World Federation had already been set to meet Oct. 31, 2016, for the ecumenical celebration in Lund, Sweden, where the LWF was founded in 1947.

Pope Francis “intends to participate” in the joint ceremony to commemorate next year’s anniversary, the Vatican press office said in a written communique. The announcement came Jan. 25, the feast of the conversion of St. Paul — “an important day with regard to ecumenism,” said Jesuit Father Federico Lombardi, Vatican spokesman. It is the last day of the Week of Prayer for Christian Unity.

Pope Francis will lead the ecumenical commemoration in Lund alongside Bishop Munib Younan, president of the Lutheran World Federation, and the Rev. Martin Junge, federation general secretary, said a joint press release by the Pontifical Council for Promoting Christian Unity and the LWF.

“The event will include a common worship based on the recently published Catholic-Lutheran ‘Common Prayer’ liturgical guide,” and will highlight ecumenical developments between Catholics and Lutherans over the past 50 years, the press release said.

Cardinal Kurt Koch, council president, said in the press release, “By concentrating together on the centrality of the question of God and on a Christocentric approach, Lutherans and Catholics will have the possibility of an ecumenical commemoration of the Reformation, not simply in a pragmatic way, but in the deep sense of faith in the crucified and resurrected Christ.”

Rev. Junge said in the joint statement that the federation “is approaching the Reformation anniversary in a spirit of ecumenical accountability.”

The common prayer document, released Jan. 11, is the first jointly developed liturgical material prepared by a task force made up of representatives of the official Lutheran-Catholic Commission on Unity.

Catholic bishops’ conferences and Lutheran churches around the world are invited to use the Common Prayer as part of local commemorations of the Reformation anniversary in 2017. The prayer includes materials to be adapted to the local liturgical and musical traditions of the Catholic Church and Lutheran communities.

Martin Luther posted his “95 Theses” on a church door Oct. 31, 1517, which is usually marked as the beginning of the Reformation. While the Reformation fractured Western Christianity, Catholics and Lutherans have been committed to dialogue the past 50 years in an effort to restore full unity.

The Pontifical Council for Promoting Christian Unity and the Geneva-based Lutheran World Federation released a joint document in June 2013 titled, “From Conflict to Communion,” which outlined ideas for joint commemorations in 2017.

The document looks at the central points of Luther’s call for the reform of the church, the points addressed later by the Council of Trent and, especially, the Second Vatican Council and issues that still divide Catholics and Lutherans.

“Luther had no intention of establishing a new church but was part of a broad and many-faceted desire for reform,” the document said. “In 2017, when Lutheran Christians celebrate the anniversary of the beginning of the Reformation, they are not thereby celebrating the division of the Western church. No one who is theologically responsible can celebrate the division of Christians from one another.”

In a meeting in October 2013 with representatives of the Lutheran World Federation and members of the Catholic-Lutheran international theological dialogue, Pope Francis said commemorations of the beginning of the Reformation must take place in a spirit of dialogue and humility.

“Catholics and Lutherans can ask forgiveness for the harm they have caused one another and for their offenses committed in the sight of God,” he said.

“I believe that it is truly important for everyone to confront in dialogue the historical reality of the Reformation, its consequences and the responses it elicited,” the pope told the group.

While theological dialogue is important, he said, the key to unity lies in prayer and trying to follow more closely the teachings of Jesus.

In other news regarding papal travel, the president of Colombia’s Catholic bishops’ conference told reporters Jan. 23 that Pope Francis would visit their country early in 2017.

St. Rita School for the Deaf: Celebrating 105 Years of Impacting the Community! 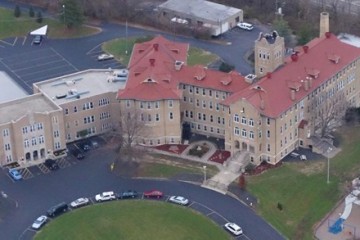