Gov. Andy Bashear (D) neither signed nor vetoed the “Born-Alive” bill that passed the state legislature. The bill, SB9, requires that infants who are born alive after an attempted abortion be given appropriate medical care.

Kentucky’s legislature passed the bill on Jan. 9, and sent it to Bashear later that day. After nearly two weeks had passed without either a veto or signature, the bill automatically became law on Jan. 22, the 48th anniversary of Roe v. Wade.

The pro-life group Susan B. Anthony List declared it an “Unexpected #ProLife victory,” as Beshear had vetoed six other bills that had been sent to him.

The bill had received support from members of both political parties and was passed overwhelmingly by votes of 76-18 in the state house and 32-4 in the state senate.

The text of the bill reads “Any born-alive infant, including one (1) born in the course of an abortion procedure, shall be treated as a legal person under the laws of this Commonwealth, with the same rights to medically appropriate and reasonable care and treatment.”

Violation of the law results in the suspension of a medical license; it also parents to file civil cases against the medical professionals complicit violating the law.

The bill’s sponsor, Sen. Whitney Westerfield (R-Crofton), tweeted on January 22 that he believed the bill was now law and that the veto window had passed.

“Working to confirm, but it seems SB9, Kentucky’s Born Alive Infant Protection Act, has become law without the Governor’s signature,” said Westerfield. “Yesterday was the deadline for a veto. I’ll take it.”

Westerfield later confirmed that the bill was indeed law, and that it was “a good day!”. He noted that the bill became law on the 48th anniversary “of the tragic Roe v Wade decision.”

“I have hope that there are still victories for life ahead,” said Westerfield.

Federal “Born-Alive” legislation has been introduced in the U.S. Congress, but did not receive a vote in the 116th Congress. In the House, 205 members signed a “discharge petition” to bring the bill to the House Floor for full consideration, but the effort fell short of the necessary 218 signatures for action.

Are changes coming to the Vatican Dicastery for Communications?

Statement on the Inauguration of Joseph R. Biden, Jr., as 46th President of the United States of America

Catholics aim for national unity with Eucharistic and rosary processions 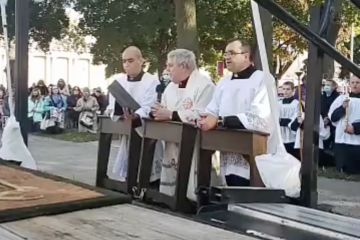