June 28, 2022 Catholic News Agency
Home»Home Page»Readers vote Light is ON For You as top story of 2014
Home Page/Local News/News

God’s mercy knows no bounds, and an Archdiocesan event highlighting that fact was the runaway top story of 2014 according to readers voting at TheCatholicTelegraph.com.

The Light is ON For You, a one day event that saw every parish in the Archdiocese of Cincinnati offer confession during the same hours on the same day was voted by readers as the year’s top story. 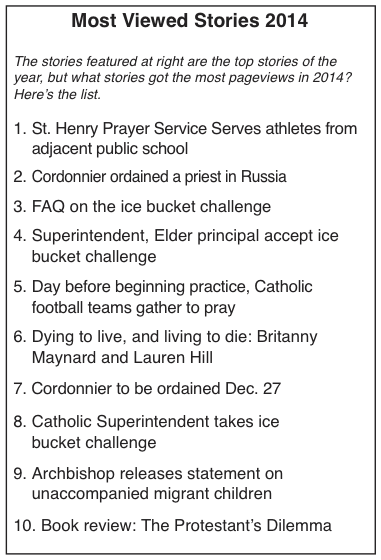 Readers were given the opportunity to rank 10 pre-selected stories as the 1-10th best stories of the year. The survey assigned scores to each entry based on the voting.

2. The story of Lauren Hill
Though she isn’t a Catholic, Lauren Hill is a freshman student at the Catholic Mount St. Joseph University. The 19-year-old woman is dying of terminal brain cancer but chose to spend her final months living her dream of being a collegiate basketball player and raising awareness for the cancer that usually kills children even younger than her.

TheCatholicTelegraph.com published multiple stories about Hill and some coverage of Hill’s story also appeared in the December edition. Hill’s collected stories earned more than 25 percent of first-place votes for a score of 6.76.

3. Archdiocese of Cincinnati prepares for canonizations
The canonizations of Pope John Paul II and Pope John XXIII were international Catholic news and drew the attention of millions to St. Peter’s Square. Locally, a pair of Catholic schools in the archdiocese bearing the names of the now-sainted pontiffs prepared to celebrate the occasions.

This story actually received zero first place votes, but still managed to crack the top three with a score of 6.25. Coverage occurred in the April edition.

5. Local seminary booming with potential priests
The Athenaeum of Ohio/Mount St. Mary’s Seminary of the West has a good problem — it is nearly full. The enrollment for the most recent academic year was 66 and the building only has space for 69. Adding to the excitement, pending 100 percent retention of all seminarians, the Archdiocese of Cincinnati could have ordain a class of priests in double digits as soon as 2019. Coverage occurred in October.

The NET Ministries story scored a 5.31 but it also received the most first place votes of any story not in the top five.

8. Day before beginning practice, Catholic football teams gather to pray
The Rosary Rally that brought together nearly 500 students and staff of area high school football teams may have been a national first. Organized by SportsLeader and The Athenaeum of Ohio/Mount St. Mary’s Seminary of the West, the event brought teams from as far south as Louisville and as far north as Springfield together for adoration, benediction and prayer. The story was among the top five local stories viewed at TheCatholicTelegraph.com in 2014. Coverage occurred in the September edition. The story scored a 4.65.

Proclaim, a convocation of lay and ordained leaders from around the Archdiocese of Cincinnati brought nearly 1,000 of Cincinnati’s Catholics together to learn to be “Contagiously Catholic.” At the event, Archbishop Dennis M. Schnurr announced new mission and vision statements for the archdiocese. The Catholic Telegraph provided daily coverage of the event online, and print coverage occurred in the November edition. The story scored a 3.86.

10. Catholic families nurture farms, faith for decades
The only “Everyday Evangelist” feature to make the top 10, this story focused on Urban and Mary Louise (Enneking) Seger and Tom and Marie Moorman. Both are part of families that have operated their farms since the 1830s. Coverage occurred in the August edition. The story scored 3.55 in the reader vote.

This post serves as an early installment of Throwback Thursday. Here’s a look at the reader rankings of our top 10 stories of the past year. For an even further throwback, check out 2013’s top stories HERE.

How Best to Celebrate Catholic Schools Week? Celebrate Our Students!

How to make a good confession

Auditions for The Athenaeum Chorale to be held 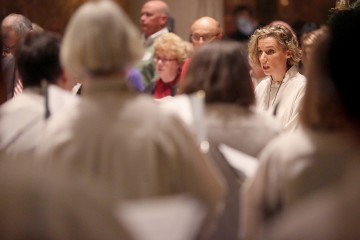