“Some great news to share: The Providence Diocese is welcoming 8 *new seminarians* this year, the most new seminarians in almost 40 years,” said Bishop Thomas Tobin of Providence, RI on Twitter last week.

“Pray for our seminarians, including the new students. God said, ‘I will give you shepherds,’ and indeed He is!” the bishop added.

Father Brian Morris, vocations director for Our Lady of Providence Seminary in the diocese, attributed the recent increase in seminarians to the community’s dedicated prayer efforts. He told CNA the seminary has held adoration every Thursday for an increase in vocations, and parishes have hosted similar efforts.

“It’s the result of a lot of prayer. People throughout our diocese have been praying diligently for more vocations, more young men who consider the call to the priesthood,” he said.

“Why God chose this year? I don’t know, that’s up to him, but I think some of it is to deal us some good news. [We are] in a time right now [of] negativity and so much going on. This is wonderful news for our diocese, and I think God is showing us a little light in the dark.”

Like many areas in the U.S., the Diocese of Providence has faced a clergy shortage as older priests retire, including some who had been responsible for multiple parishes. These parishes are often then faced with practical challenges, such as limited sacramental ministry.

In addition, some parishes have closed in recent years as church attendance drops.

Father Chris Murphy, the rector of the seminary, told CNA that the increase in seminarians is encouraging. However, he stressed that quantity alone is not the goal.

“We have to remember to trust in the Lord that he’s going to provide the shepherds for the Church that the Church needs at the current time.”

The diocese has also taken serious steps to enhance its vocation efforts, Murphy said. Events such as Hiking with the Saints offer opportunities to interact with priests. Additionally, the diocese reintroduced Quo Vadis retreats – which allow high school boys to deepen their faith and learn more about vocations – after a several year hiatus.

While these events and retreats are helpful, Murphy said, the greatest fruits have been borne from building personal relationships with young men over the years. These relationships have included one-on-one meetings or phone conversations while the men are away at college.

“I would say even more important than [events] is the example of the witness of the priests in these men’s lives – their pastors, their chaplains, their theology teachers at the high schools for the Catholic high school students,” he said.

The priest said that he tries to provide opportunities for fraternity, but added, “truth be told, I think that a lot of the work is done at the local level through the parishes.”

Father Morris said the increase in seminarians is a sign of hope for the local Church and community.

“I just think it’s a wonderful, hopeful image to see these young men, who come from very diverse backgrounds and [have] different personalities, to show that there is not like a cookie-cutter image of a priest, to show that young men are still looking at something greater than what the world is offering them,” he said.

Vatican: Baptisms administered 'in name of the community' are invalid 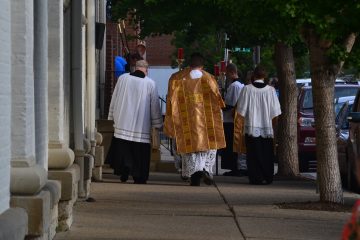