NAIROBI, Kenya (CNS) — Missionaries and other Catholics gathered in Nairobi May 23 for a requiem Mass for a Slovak nun killed in Yei, South Sudan.

Holy Spirit Missionary Sister Veronika Theresia Rackova, 58, director of St. Bakhita Medical Center in Yei, was shot the night of May 16 while driving an ambulance after taking an expectant mother to the hospital. When the ambulance was attacked by soldiers, Sister Rackova was wounded in the hip and abdomen.

After two surgeries in Yei, she was evacuated to Nairobi, where she died May 20.

Sister Maria Jerly, regional superior for the Holy Spirit Missionary Sisters, told Catholic News Service that Sister Rackova was shot as people marked John Garang Day. She added that a motive for the shooting was not known.

Three soldiers were arrested in connection with the incident, and Sister Jerly added, “One of them is said to have admitted having shot at Sister Rackova.”

Six of the order’s nuns are serving in South Sudan, mainly in the Yei Diocese. Sister Jerly told CNS the congregation did not plan to leave the area.

Sister Jerly said Sister Rackova would be buried in Kenya, and that the Divine Word Fathers, the sisters’ male counterparts in Kenya, would handle the arrangements. A statement from the Holy Spirit Missionary Sisters said due to the complexity and legal implications of the situation, the order could not confirm date and place of funeral.

Sister Rackova was born Jan. 8, 1958, and professed final vows in 1994. As a medical doctor with specialization in tropical diseases, she worked in Ghana. She served as head of the province of Slovakia 2004-2010, after which she was assigned to South Sudan.

Throwback Thursday: Role of women in church examined in 1975 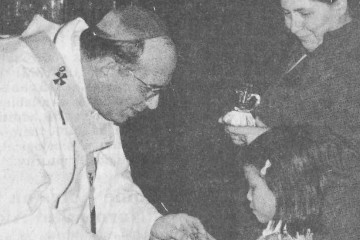