Bishop Paprocki: Regarding Communion debate “There should be no unity with iniquity”

The Final Word: Generations of Faith A Living Inheritance

A Century of Service: Catholic Social Services of the Miami Valley

Spend Labor Day in solidarity with the poor, US bishops say

CNA Staff, Sep 3, 2020 / 10:00 am MT (CNA).- The U.S. bishops’ conference is encouraging solidarity, charity and compassion for low-income and essential workers during the upcoming Labor Day festivities in light of the ongoing coronavirus pandemic.

“This Labor Day is a somber one. The COVID-19 pandemic goes on,” said Archbishop Paul Coakley of Oklahoma City in a statement released by the United States Conference of Catholic Bishops on Wednesday, Sept. 2.

Archbishop Coakley is the chairman of the USCCB Committee on Domestic Justice and Human Development.

“The dignity of the human person, made in the image and likeness of God, is not at the center of our society in the way it should be,” said Coakley. “In some workplaces, this has meant an emphasis on profits over safety. That is unjust. Consumerism and individualism fuel pressures on employers and policy makers that lead to these outcomes.”

The archbishop said that the coronavirus’ impact on the economy has brought damage to the country’s financial, mental, and physical health.

“Economic circumstances for so many families are stressful or even dire,” he said. “Anxiety is high. Millions are out of work and wondering how they will pay the bills. And for workers deemed ‘essential’ who continue to work outside the home, there is the heightened danger of exposure to the virus.”

While the situation is dire, said Coakley, Pope Francis’ reflections that the devastation wrought by the pandemic could result in a regeneration of beauty and hope.

“God never abandons his people, he is always close to them, especially when pain becomes more present,” said Coakley.

“God knows the challenges we face and the loss and grief we feel. The question to us is this: will we pray and willingly participate in God’s work healing the hurt, loss, and injustice that this pandemic has caused and exposed? Will we offer all we can to the Lord to ‘make all things new?’”

“As a result, low wage workers, migrant workers, and workers of color, have borne a disproportionate share of the costs of the pandemic,” he said. Even prior to the arrival of the coronavirus pandemic, “a significant number of Americans were trapped in low wage jobs, with insecurity around food, housing, and health care, and with little opportunity for savings or advancing in their career,” a situation that has not been made any better.

“It is devastating to say, many have paid with their life,” said Coakley.

Coakley also touched on the growing civil unrest throughout the country, saying that things that “may have been hidden to some” are now being revealed.

“Against this backdrop, the murder of George Floyd was like lighting a match in a gas-filled room,” he said.

There is, however, cause for optimism even amidst these times, said Coakley.

“Injustice does not need to have the last word,” he said. “The Lord came to free us from sin, including the sins by which we diminish workers and ourselves.”

Coakley advised Catholics to be conscious consumers of the goods they purchase, and to consider the origins of the items and how companies treat their employees.

He also encouraged Congress and the White House to “reach a deal that prioritizes protecting the poor and vulnerable” as the government has played an “indispensable role” in addressing the various crises.

The archbishop further noted that the Catholic Campaign for Human Development, which turns 50 this year, has done much to alleviate the effects of the pandemic.

“The CCHD-supported Rural Community Workers Alliance has helped organize workers in rural Missouri, pressuring employers to take these concerns seriously and advancing the dignity of workers,” he said. “These groups, as well as labor unions and other worker associations, make an invaluable contribution to the safety and wellbeing of workers.”

Catholics, said Coakley, “are each called to practice solidarity with those in harm’s way” in order to preserve worker’s rights and their dignity. He encouraged people to donate to local food banks and Catholic Charities agencies.

“Pope Francis is fond of citing the 1964 dogmatic constitution, Lumen Gentium, which reminded us that ‘no one can save themselves alone,’” said Coakley.

“This is true in this life and the next. The fruits of individualism are clear in the disparities brought to light by this crisis. Through our work of solidarity, let us be a counter-witness to individualism.”

‘Eucharistic Revival’ to begin in 2022: ‘We want to start a fire, not a program’

Spend Labor Day in solidarity with the poor, US bishops say

Today’s Video: A look back at the Marian Pilgrimage in the Archdiocese 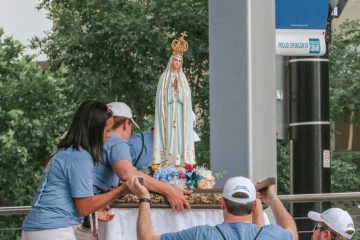