Though no longer a stand-alone parish, St. Joseph in Wapakoneta is among the oldest Catholic communities in the Archdiocese of Cincinnati.

The parish hosted a 175th anniversary Mass on April 27 with Archbishop Dennis M. Schnurr celebrating. A supper took place after Mass and more events are planned throughout the year to celebrate.

Now part of the Petersburg pastoral region with Immaculate Conception (Botkins), St. Lawrence (Rhine) and St. John the Evangelist (Fryburg), St. Joseph’s was founded in 1839 and the parish was placed under the auspices of the Society of the Precious Blood in 1850. The current church building, located at 309 Perry Street in Wapakoneta, was built in 1911. In 2003 the Society of the Precious Blood returned the parish to the Archdiocese of Cincinnati. The parish school operated from 1853 until 2010.

A parish with a long history, there was an adjustment period when joining the region.

“St. Joseph has done a wonderful job entering into a pastoral region,” Father Pat Sloneker, pastor of the Petersburg region, said. “Clearly, there were some challenges at first, for example, some resistance to sharing staff members and events, like the Easter Vigil… The people of St. Joseph were humble enough to follow the lead of two smaller parishes who had been working together for over twenty years in a two-parish region.  A challenge of “regioning” met with humility led to new and better life for all, truly, a resurrection.”

The four parishes are served by Father Sloneker and associate pastor Father Daniel Hunt. Father Sloneker has been pastor of Immaculate Conception and St. Lawrence for 12 years and pastor of St. Joseph for five years. St. John the Evangelist joined the region this month.

While the church is now operated by a diocesan priest in Father Sloneker, for its first 164 years the parish was served by the Missionaries of the Precious Blood. The last Precious Blood priest to serve there was Father Bill Eilerman, who is deceased. Precious Blood Father Bill O’Donnell, currently stationed in at St Margaret of Scotland in Chicago, served the parish for nine years and still remembers St. Joseph’s fondly.

“I found a community of deep faith and commitment to the church that enriched my life,” Father O’Donnell said of his former parish. “At this historic moment may the renewed interior of the church building, that is beautiful, be seen also as a reminder of what a cherished past and hope-filled future await those who follow the Lord faithfully.”

The parish festival, July 3 & 4, is the 64th Fourth of July Festival by the church and will include an  exhibit on parish history to commemorate the 175th anniversary. Sept. 1 through Sept. 8, a photography initiative and exhibit will document “A week in the life of a parish,” the results of which will be in the 175th anniversary book the parish plans to produce in 2015. Other events dot the calendar before a grand farewell to the 175th year in November. 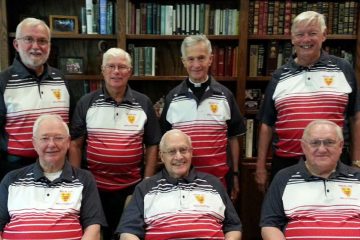