ST. LAWRENCE DEANERY — The members of St. William Church in Price Hill celebrated 100 years of faith and community on Nov. 8 during a liturgy marking the parish’s centennial.

Coadjutor Archbishop Dennis M. Schnurr presided at the Mass, with Father Andrew Umberg, the current pastor, Father Paul Rehling, who assists at the parish on the weekends, and Fathers Paul Bader and Philip Seher, former pastors, among the concelebrating priests. The church was filled to capacity for the Mass, which Father Umberg described as “very solemn, bright and beautiful. It was a very heartwarming celebration for the people.”

In his welcoming remarks to those gathered for the Mass, Frank Kane, St. William’s volunteer business manager, recognized the contributions of the Sisters of Charity of Cincinnati who have served the parish since 1911 when they arrived to begin preparations for the new school. Adding to the beauty of the liturgy were the voices of the parish choir under the leadership of David Allen, music director at the parish since 1962.

Kane, who grew up in the parish and attended school there, said “The Mass was very inspirational, almost overwhelming. You got a sense of the degree of the faith of our parishioners.”

That faith dates back to the fall of 1909 when then-Archbishop Henry Moeller decided a new parish was needed in Price Hill to relieve the nearby St. Lawrence Parish of its increasing number of members. The parish was named St. William after Archbishop Moeller’s predecessor, Archbishop William H. Elder. The first services were held on May 22, 1910, in a temporary structure built on property donated by Herman Elsaesser. The school opened its doors in 1912, with an addition added just three years later to accommodate the growing enrollment. The stock market crash of 1929 delayed the completion of the new church until 1931, when Archbishop John T. McNicholas dedicated the present structure.

With the changes implanted by the Second Vatican Council, St. William became one of the first area parishes to feature a guitar Mass. The 1970s brought spiritual renewal to the parish under the leadership of Msgr. Francis Kennedy. Among his contributions was Christ Renews His Parish. The 90s were a time of refurbishment and renovations, along with the opportunity to reach out to the local community when St. William became part of the Interfaith Hospitality Network.

Today St. William serves approximately 700 families with 272 children in the school, including 27 in the school’s  unique autism scholarship program. Father Umberg, pastor since 2005, said his first four years at the parish have been a time of “fundraising, sprucing up and repairs as we’ve prepared for the centennial celebration.”

“Since I’ve been at St. William, it seems that everyone I’ve spoken to who has been a parishioner treasures their time here,” he added. “There are many happy stories to tell and a tremendous feeling of faith and community. It’s an honor for me to be part of that tradition.”

“Father Umberg has been such a positive force in our parish,” said Kane. “He and Catie Blum (principal) have recharged us with their energy and leadership.”

“It’s exciting to have Father Umberg here,” added Pat Schloemer, a member of St. William for 60 years. “He loves our church and does everything he can to take of the spiritual and physical needs of the parish. We’ve been so fortunate with all of the pastors we’ve had.”

Schloemer has many fond memories of her years St. William. She and her late husband, Don, moved into the parish shortly after they were married and immediately felt “like we were at home.” The couple’s five children attend school at St. William and Schloemer worked there as the librarian for 25 years. “I loved every minute of it,” she said.

She described the parish as “a real community with a lot of supportive people. We all look out for each other. We have some long-time members and many young families with children.”

Reflecting on the centennial celebration, Schloemer added, “I think back to how the church got started and how the early members worked so hard. It’s just amazing to me.”

“This parish is a monument to the faith of the people here,” said Kane. “We’re a strong parish and a strong community.”

A reception followed the Mass. Other events are also being held in conjunction with the centennial, Kane said, including a dinner dance scheduled for next Jan. 30.

Young men hear from coadjutor archbishop, others about the priesthood 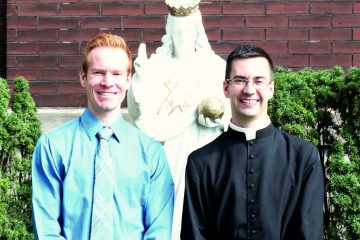