After a break-up, people could easily lose touch with their ex, who could move or change phone numbers. Tracking them down, sans Google or social media, was at least somewhat difficult.

Today, that has changed. An ex may be far from one’s mind, until a photo of their wedding, or baby, or recent vacation pops up in a social media feed.

That could spell trouble for current relationships, according to a recent report on relationship happiness and online behaviors.

In a survey that included 2,000 married, cohabiting and single people spanning multiple generations in the United States, as well as data from the General Social Survey, researchers found that couples who flirted with online boundaries and relationships were less happy than those who kept strong online boundaries.

The analysis of the survey, entitled “iFidelity: The State of Our Unions 2019,” was a research project from the National Marriage Project at the University of Virginia and the School of Family Life at Brigham Young University.

“Those currently married or cohabiting who blur those boundaries are significantly less happy, less committed, and more likely to break up while, conversely, those taking a more careful stance online are happier, more committed, and less likely to separate,” the study states.

“For example, those who did not follow a former girlfriend/boyfriend online had a 62% likelihood of reporting that they were ‘very happy’ in their cohabiting or marital relationship. Only 46% of those who did follow an old flame online reported being very happy.”

The survey asked about nine online behaviors, and whether or not participants considered them to be “unfaithful” or “cheating.”

According to the survey, most Americans (70% or more) rated six behaviors as cheating or unfaithful, including “having a secret emotional relationship or sexting with someone other than a partner/spouse without the partner’s/spouse’s knowledge and consent.”

Three behaviors were the exception – most Americans did not find flirting with someone in real life, following a former love interest online, and consuming pornography to be cheating or unfaithful behaviors.

W. Brad Wilcox, editor of the survey and director of the National Marriage Project, told CNA that he thought there were at least three possible reasons for this discrepancy.

“Millennials have been shaped by the rise of the internet more than other generations so that has conditioned them to be more open to these kinds of boundary-crossing behaviors on the internet,” he said.

“Another possibility is that they’re just younger and that’s the story here, and as they age and mature they will be more prudent about how they approach the internet. The third possibility here is that they’re more likely to be cohabiting couples than married, and we’ve also seen the data that cohabiting couples are more likely to cross these emotional and sexual boundaries online compared to married couples,” he added.

One of the most surprising and concerning finds of the study for Wilcox was that there was a noticeable decline – an 8 point percentage over a 20 year span – of people who said it was “always wrong” to have sex with someone who is not one’s spouse.

“This is a worrisome development because we know that support for sexual fidelity in principle and also living the virtue of fidelity in practice are both linked to higher quality and more stable marriages,” he said.

Jeffrey P. Dew, an associate editor of the study and an associate professor in the School of Family Life at Brigham Young University, told CNA that one of the findings of the survey that surprised him was that the rate of unfaithfulness in marriage has remained stable over the past few decades, despite increasingly permissive attitudes about marriage and sexuality.

“In terms of the percent of ever-married people who admit to having an affair, that’s been stable at about 15% for two or three decades now,” Dew said.

“That surprises me. Certainly as a society we’re much more permissive and tolerant of people’s lifestyle choices, and yet we still find, when it comes to their own behavior, the vast majority would just as soon make sure that their own relationship is exclusive.”

Part of the problem of unfaithful online behaviors is that they can be based on a false perception that greater happiness lies elsewhere, Dew said.

“I think even just following an old boyfriend or girlfriend can be problematic because you compare what you think you see online to your own real life, lived experience with your current partner,” he said.

“Of course we know that Instagram and Facebook and all those other social media sites – everyone portrays life as this golden, glowing, happy thing, so of course following an old flame online might cause your own current relationship to sour somewhat,” he said.

Wilcox said the way people perceive their online lives as being somehow different or separate from their real lives could also be a factor in permissive attitudes toward online infidelity.

“Most of us are probably more considerate and thoughtful about how we treat others in person than when we are interacting with them online, in terms of a disagreement for example,” he said. “I think that same spirit of kind of greater orientation towards risk or being less careful also applies to this domain of our online lives.”

Jackie Francious-Angel and her husband, Bobby, are Catholic speakers on the topic of relationships and marriage, and are the authors of “Forever: A Catholic Devotional for Your Marriage.”

Jackie told CNA that she agrees that online infidelities might be easier to slip into, because people are less careful with what they say online than with what they would say in real life.

“With messaging and texting…you say things there you would never say face to face, because it’s so easy,” she said.

“Words carry weight and meaning,” Bobby added. “We could think, ‘well I didn’t do anything, nothing actually happened.’ We equate cheating with physical activity. But…our words and what we’re doing digitally has just as much an impact on our relationships as physical activity does.”

Jackie said that a good rule of thumb for couples to consider is whether or not they would be ok with their spouse reading their text messages or social media messages.

Bobby told CNA that the internet and social media have placed young adults in a “weird era” where they have to reconsider what appropriate boundaries are in light of their online lives.

“So much of this stuff lives on online, where it used to be over and done, and I didn’t have to (see an ex),” he said. “But now it’s like look, here’s a picture.”

Jackie and Bobby said that when it comes to following old flames online, they believe spouses should discuss with each other what their boundaries are. If a former relationship was casual and mutually fizzled out, that might be ok, they said, but if it was emotionally intense, that might be a different consideration.

“We have friends who even on text messages, they’ll add me and Bobby both on a thread just to be above reproach,” Jackie said. “There’s not a lot of need to text people of the opposite sex” in a marriage, she added.

Bobby also noted that despite the attitudes reported in the survey, he still considers pornography to be cheating.

“(Pornography) hijacks our God-given ability to love and to long for beauty and just twists that so it’s a selfish, destructive force,” Bobby said.

“The reality is if I vow myself to look at and be faithful to one and only one woman, emotionally and physically, my whole sexuality, my intimacy – and then go out and seek out pictures and videos of other people – it’s absolutely cheating,” he said.

“It’s cheating yourself as well as your relationship. It’s a ripple effect. It doesn’t make (people) happier, it takes a toll on their family…because you’re just in this angry, dejected state. I think if you look at it from the world’s perspective of cheating, did you go out and have an affair? Well no. But I would say you’re cheating your relationship.”

Ultimately, Jackie and Bobby said good relationships need transparency, good boundaries and the self-knowledge necessary to avoid situations that could lead to infidelity, online or in real life.

“Nobody sits down and is like, ‘This year I’m going to cheat on my spouse,’” Bobby said. 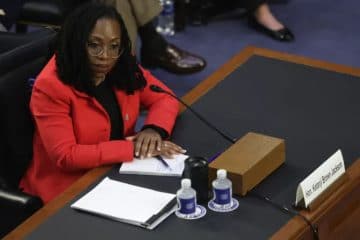