CNA Staff, Oct 29, 2020 / 06:30 am MT (CNA).- The French bishops asked churches across the country to toll their bells Thursday in memory of three people killed at a basilica in Nice by an attacker shouting “Allahu Akbar.”

In a statement Oct. 29, the French bishops’ conference asked parishes to sound the death knell at 3 p.m. local time. They also invited to Catholics to pray for the victims.

They issued the appeal after an attacker armed with a knife killed three people at the Basilica of Notre-Dame at around 9 a.m. local time.

Christian Estrosi, Nice’s mayor, wrote on Twitter that two of the victims were killed inside the basilica. Reuters reported that a woman was beheaded during the attack.

He said that the perpetrator, who was armed with a knife, was shot and arrested by the municipal police.

In their statement, the French bishops said: “The murders perpetrated this morning in Nice in the Basilica of Notre-Dame plunge the French bishops’ conference into immense sadness. Our thoughts and prayers go out to the victims, the injured, their families and loved ones.”

“It is because they were in the basilica that these people were attacked, murdered. They were a symbol to be slaughtered.”

They continued: “These killings remind us of the martyrdom of Fr. Jacques Hamel. Through these horrible acts, our entire country is affected. This terrorism aims to instil anguish throughout our society. It is urgent that this gangrene be stopped, just as it is urgent that we regain the indispensable fraternity that will keep us all strong in the face of these threats.”

“In spite of the pain that grips them, Catholics refuse to give in to fear and, together with the whole nation, they want to face this insidious and blind threat.”

The bishops’ comments came after Vatican Cardinal Robert Sarah said that the West must wake up to the threat of Islamism after three people were killed at a French church.

The Guinean cardinal wrote on Twitter Oct. 29 that “Islamism is a monstrous fanaticism which must be fought with force and determination.”

“It will not stop its war. Unfortunately, we Africans know this all too well. The barbarians are always the enemies of peace,” the prefect of the Congregation for Divine Worship and the Discipline of the Sacraments wrote.

“The West, today France, must understand this. Let us pray.”

The attack in Nice follows the beheading of Samuel Paty, a Paris school teacher, in an Islamist terror attack earlier this month.

Bishop André Marceau of Nice said that all churches in the city had been closed and would remain under police protection until further notice.

“My sadness is infinite as a human being in the face of what other beings, called human, can do,” he said in a statement.

“May Christ’s spirit of forgiveness prevail in the face of these barbaric acts,” he said.

In a statement, Archbishop Michel Aupetit of Paris commented: “We pray for the victims and their families, but we are stunned by this murderous madness in the name of God. God has revealed Himself as a God of love. Murder in His name is the true, the only, blasphemy, an insult to who He is.”

“Christ will tell us in the Gospel of All Saints’ Day: ‘Blessed are you if you are insulted, if you are persecuted for my sake, for your reward is great in heaven.’ We know that these are not just words. From the beginning, Christians have been persecuted, and even today it is they who, although they preach and live by the love of God and neighbor together, pay the heaviest price in hatred and barbarism.”

Mohammed Moussaoui, president of French Council of Muslim Faith, condemned the attack and asked French Muslims to cancel their festivities for Mawlid, the Oct. 29 celebration of Muhammad’s birthday, “as a sign of mourning and solidarity with the victims and their loved ones.”

Archbishop Schnurr Issues Statement on the Shooting in Dayton, OH 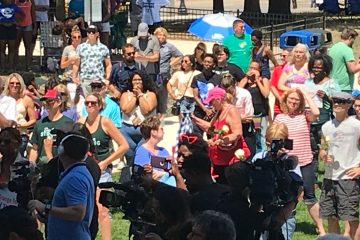